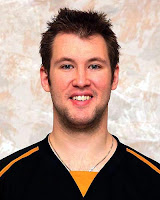 Texas goalie, Brent Krahn, has been named to the AHL All-Stars Canadian team. Given recent acquisiton of goalie Todd Ford, it is doubtful he will be ready to play in the game on the 19th of January. However, this marks Krahn's first selection to the team. He will be joined by Manchester’s Jonathan Bernier and Hamilton’s Cedrick Desjardins between the pipes for Canada.