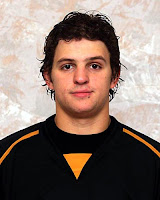 Texas Stars defenseman, Ivan Vishnevskiy, has been named as a starter for the 2010 PlanetUSA AHL All-star team. Vish, originally from Barnaul, Russia, is the first Texas Stars player to be named a starter in an AHL All-Star game and the first Texas defenseman to be named to an AHL All-Star team.
Vish will also likely be the first player to play in an AHL All-Star game, unless Brent Krahn gets healthy by the 19th on January. Krahn was selected yesterday as one of three goaltenders for the Canadian team.
TheAHL.com Player Profile: Ivan Vishnevskiy
TheAHL.com: 2010 PlanetUSA AHL All-Stars announced
allstar