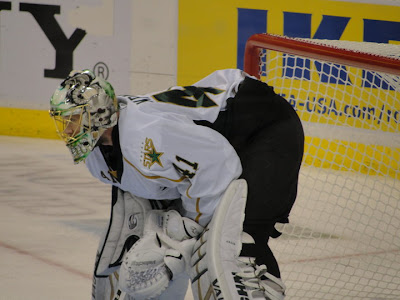 Contentious at times but victorious in the end, Texas battled Rockford to hold serve and win both of their home games in their West Division playoff series.

Texas opened in the scoring in the first period. A battle in front of Rockford netminder Corey Crawford by Travis Morin and Colton Sceviour bounced the puck out to Maxime Fortunus who slapped it in from the top of the right wing circle. It was Fortunus's 1st of the playoffs.

Only five minutes later, Perttu Lindgren notched his first of the playoffs as well. Colton Sceviour was in on the play again, making the initial shot that bounced off Crawford's pads to Perttu Lindgren. "Great play by [Colton Sceviour]," said Lindgren after the game. "It was almost empty net."

The Stars outshot the IceHogs in the first and overall on the night, a rarity for this team. In the second period, Rockford outshot the Stars and Brent Krahn shined bright again. Krahn had a glorious skate save at around the 7 minute mark of the second on a slow dribbler that would have gone in. Texas locked down the traffic in front and Krahn did his part to stop the outside shots. "Guys did a good job of tying up sticks," remarked Krahn. "I can see the shot, so my guys are doing a great job of sealing out."

Ray Sawada scored his 2nd of the playoffs in as many games to start the third period. Some fancy passing at the blueline by Sawada got the puck over to Warren Peters on the left side. Peters skated down the left side and got it back to Sawada who ticked one off Crawford's glove and into the net. Crawford was not happy with himself after that play.

With the score at 3-0, all sorts of unpleasantness ensued in the last 7 minutes of the game. Scott McCulloch and Danny Richmond dropped gloves in the Rockford zone, and a scrum behind the Texas net led to misconduct penalties to Ray Sawada and Danny Bois. Peters, who was also involved in the scrum behind the net, commented that there were "certain incidents there where we felt we needed to respond."

With five minutes to go, Brent Krahn lost the shutout bid. A hard kick off the end boards on a shot by Connelly ended up on the stick of Kyle Beach behind the goal line. His shot banked in off Krahn, who was facing the shot but not expecting it. Regarding the loss of the shutout bid, "We could have won 9-8," Krahn said, "and I would have been just as happy."

So now the series moves to Illinois with Texas leading 2-0. Coach Gulutzan knows that winning two here in Austin was huge for the team. "It's hard to win back to back against the same team," said Gulutzan. "It was nice to get those two." And regarding the significance of the 4-0 record that Texas has in Rockford: "It means our players know they can win in that building but in the playoffs you have to work to win. It's not nothing."

Sergei Korostin played tonight after dressing last night but not taking a shift.

The Texas Stars’s playoff hopes took a major hit on Wednesday as they fell to the San Antonio Rampage in a 5-3 decision. Brad McClure, Joel Hanley, and Rhett Gardner all scored to help the Stars to a 3-1 lead in the early minutes of the second period, but they went on to allow four unanswered goals.
“I thought it was a tale of two different teams tonight,” said head coach Derek Laxdal. “Played decently the first half and just fell apart in the second.”

“We came out hard in the start of the second and we popped a couple,” added Hanley. “It was nice to get ahead there, but I think we took our foot off the pedal a little bit and let them back in the game.”

McClure opened the scoring fourteen minutes into the period after two Stars power plays failed to do the trick. McClure went short side on Jared Coreau who couldn’t get the full glove on it.


The Stars dominated in puck possession and shot total, outshooting the Rampage 14-3 in the opening frame. They left the period with a tie game, h…