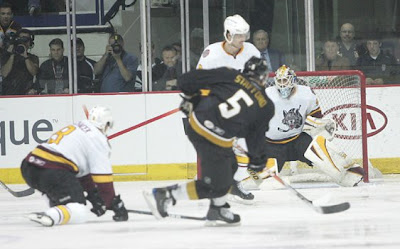 The Texas Stars showed no signs of rust after their one week layoff from playoff hockey, taking game one of their division final series with Chicago in dramatic fashion. The overtime win was the first in Texas Stars history and also the first playoff overtime game for the franchise.

Texas started the scoring in the first period and never trailed in the game. Colton Sceviour potted his first of the playoffs just 6:34 into the first period. Sceviour took advantage of a bounce of the puck off of the Wolves' Greg Stewart and backhanded it past Mannino for the 1-0 lead. The lead didn't last long as Chicago's Jason Krog redirected Arturs Kulda's "shotpass" between the pads of Brent Krahn to tie it at 1 just 53 seconds later. Overall the first period was high in shots with 13 a piece but each tender only allowing one past.

Again in the second, Texas opened the scoring. Francis Wathier tipped a Maxime Fortunus bomb from the point for his first of the playoffs. The goal came on a delayed penalty call on the Wolves. Chicago answered back on the power play when Anthony Stewart's redirection beat Krahn for the 2 all tie. Texas and Chicago tied on shots in the 2nd period as well at 9 for a total of 22 for each team through two periods.

Before we knew it in the third, it was Jamie Benn striking again. Benn scored his fourth of the playoffs on garbage collection from a Dan Jancevski shot. With 19:44 left in the period, Texas had to defend a 1 goal lead. It was close, but it couldn't be done. Chicago tied it up off a faceoff in the Stars zone. The puck bounced off a Stars defender's skate and landed on the stick of Joey Crabb, who found twine behind Brent Krahn for the 3-3 tie. Dan Jancevski would take a high-sticking penalty with 1:42 left in the game, leaving Texas short-handed trying to fight for overtime. A solid PK took the game to the extra period.

The Wolves had some malfeasance of their own as Jason Krog, their leading scorer against the Stars, took a high-sticking call 66 seconds into the OT period. With Texas on the power play, Garrett Stafford accepted a pass from Jamie Benn and scorched one from the high slot to the back of the net.

Brent Krahn was fantastic, especially in the third. He took 13 shots and made 12 saves in the period. Overall, he faced 35 shots and stopped 32. Peter Mannino had 24 saves on 28 shots at the other end of the rink. Krahn did have to make some solid saves for the Stars to keep them in the game. However, I think the Stars defense has come to play in this series. Despite the high number of shots, I don't think the quality was as high as the Wolves would like. Certainly a step above the quality of the IceHogs' shots, but not quite at the top of the Wolves' game.

Next game is a matinee on Sunday afternoon. With Texas's win tonight, they have taken away the Wolves' home-ice advantage. Yes, Texas and Chicago may both have 3 home games but Chicago has to win in Texas now to get their 4th and win the series.

Tonight's attendance was 3,576. I thought hockey was big in the north?