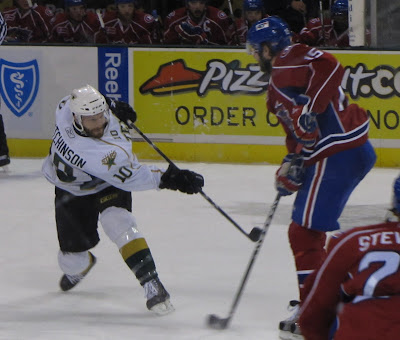 Following two 60-plus minute games at home, the Texas Stars would only need 60 to decide the game tonight. They probably wouldn't have minded if the game was called after 40. An anemic offensive effort for the Stars and solid goaltending from Curtis Sanford put one more nail in Texas's playoff coffin. "We were a little flat," said Coach Gulutzan, "[Hamilton] definitely deserved to win."

The Bulldogs took an early advantage with Ryan Russell potting a power play tally. Jamie Benn took the penalty, a questionable call for holding where Benn fell down and the guy he was standing next to came with him. Russell scored off the rebound to make it 1-0 13 minutes in. Climie talked about the goal, "My stick got tangled up with [Jancevski] in front and I couldn't really recover from it." The goal would prove to be the game winner.

Hamilton piled it on in the second period, scoring two more goals for insurance. Mike Glumac collected a rebound in the low slot and fired it past Climie just past the 3 minute mark. David Desharnais added his 9th of the postseason with 5 minutes left in the period, roofing a shot over Matt Climie after skating in practically unabated.

Texas had their chances, but nothing came of them. Benn mused, "We just gotta keep it simple and put pucks on net. We might be doing a little too much out there and I think we just gotta start shooting." Texas had a certain lack of execution in the game tonight. The passing game reverted to mid-season form with basic forehand to forehand passes missing the mark or bouncing off the stick. "We needed to win puck battles and we didn't have that tonight," added Coach Gulutzan. And indeed, it did seem that Hamilton was the team leaving the scrum more often with the puck than Texas.

When you add to this equation a 33-23 shots advantage for Hamilton and eight power play chances in the game, it becomes difficult to formulate a winning game plan. Texas now faces elimination in Game 6 and will have to win both of their contest in Hamilton for the right to play Hershey for the Calder Cup.

Today is the deadline for NHL teams to issue qualifying offers to their restricted free agents. There were only two players who played for Texas this year who received offers. Cameron Gaunce and Scott Glennie were the only two players to receive offers.

Ryan Button, Hubert Labrie, Dustin Jeffrey, Austin Smith and Tristan King did not receive offers. They will become unrestricted free agents now and are free to sign with any team. Jeffrey is likely the only player who will garner NHL consideration among the group.

This is mostly what I expected with regard to the RFA group. Gaunce and Glennie were the only sure things in the crew. Smith and King were the only certain "no"s. Among the toss-up group, none of the RFAs were offered.

Hubert Labrie and Ryan Button will probably garner AHL interest this coming season. Tristan King may head to Europe given his limited success this past season in the ECHL. Austin Smith has already signed in Finland.

Dustin Jeffrey has the potential t…

[Ed. Note: It is with a heavy heart that I announce the departure of staff writer Ryan Pennington from the site. Ryan is off to pursue career interests that will make it rather tough for him to continue coverage for 100 Degree Hockey. I cannot possibly say enough about how difficult it is to see him go, especially without a proper end-of-season sendoff. He was an excellent contributor, is a true professional, brought an amazing personality to our social presence (pig facts, anyone?) and has become an excellent friend as well. Please wish him the best in his future pursuits.]
In July of 2017, I emailed Stephen at 100 Degree Hockey with a modest proposal. I fancied myself a fairly decent writer at the time, and I was interested in developing that skill while learning the world of sports journalism. I was also madly in love with hockey.

I asked Stephen if he was willing to give me an opportunity to merge those interests with a potential writing role. A couple short months later, I found …