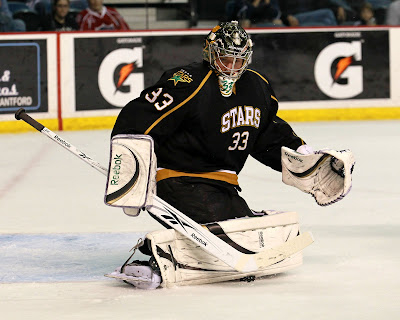 When the game goes to overtime, it always seems like the game is decided early or late in the overtime period. The Texas Stars and Aaron Gagnon decided it late tonight in the first overtime to force the second Game 7 in the Stars short history on Wednesday night.

Texas came out of the gate with a quick pace. The Stars led in shots at one point 6-3, but then an Aaron Gagnon delay of game penalty turned the shots count the other way. The Bulldogs would strike first in the game with 3 minutes left. Rookie Gabriel Dumont scored on a rebound up over Matt Climie to bring the period to a close at 1-0. The period would end with a 14-10 shots advantage for the Bulldogs.

Texas got a goal of their own on a delay of game power play. Garrett Stafford tallied his third of the playoffs on a rebound in front that he elevated above Sanford. Texas led the period in shot count 14-11 but allowed another goal at the end of the period. Shawn Belle took advantage of a Texas penalty to score on a centering pass from Brock Trotter. Belle was unguarded in the low slot and Texasfell to a 2-1 deficit.

Texas and Hamilton battled it out in the third period, totaling 21 shots between the two teams. Hamilton got the better of Texas in that department, outshooting the Stars 15-6. Texas got the goal they needed though to take it to overtime. On a delayed penalty, Greg Rallo and Scott McCulloch broke in to the Hamilton zone. Rallo flew down the right side and managed a pass to McCulloch on the left side who bounced it past Sanford for the tying goal. Texas may have been outshot in the period, but maintained good pressure throughout the period. Matt Climie had timely saves as well to keep them in it. For the fourth time in the series, Texas and Hamilton would need extra time to decide the game.

Texas and Hamilton played a cardiac game, with shots and chances going back and forth. Matt Climie was on top of his game stopping all 13 shots in the overtime period and 51 of 53 in the game. It came down to the stick of one Aaron Gagnon. Gagnon came down low to take a Jamie Benn rebound and sneak it in on the left side post of Sanford.

Texas will now faceoff with Hamilton on Wednesday night at 6:30 to decide who gets the right to play in the Calder Cup playoffs.