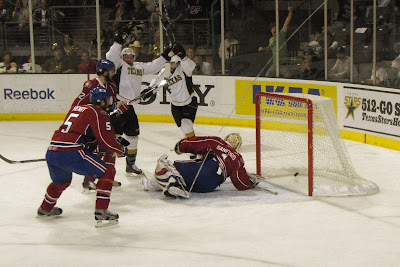 Ethan Graham had yet to score a Calder Cup playoff goal in his entire career. In fact, Graham had only suited up for four playoffs games for the Stars before tonight. "It's probably my biggest [career goal]. I think I had an overtime winner in bantam, so... bigger than that!" said the unlikely hero Graham.

Hamilton got a lot of bad angle shots in past Texas tonight. Texas countered with a lot of gritty goals from within 4 feet of the net. Hamilton scored first in this one, putting one in from a sharp angle with Matt Climie out too far to stop it. Texas answered with a baseball swing shot from Perttu Lindgren that beat Sanford glove-side high on the power play. Texas went to the first intermission tied at 1 with the shots advantage at 12-10.

The second was fast and furious with 3 goals in the frame. Texas's Jamie Benn scored on the power play on a cram play in tight with Brock Trotter in the box for hooking. Again on the power play five minutes later, Texas's Aaron Gagnon collected a rebound off traffic in front of the net and shot it top corner to beat Sanford on the power play. Texas did a good job all night of getting in Sanford's face at the right time to create screens. Sanford didn't even see the Gagnon goal coming.

Hamilton took it to 3-2 just a minute later as the puck popped out to the slot from Ryan Russell at the boards and Mike Glumac nailed it home stickside high on Climie. Aided by three power plays in the period, Texas led the shots count 14-6 in the frame and 26-16 overall.

Hamilton's Brock Trotter opened the 3rd period scoring to tie it at three. Another bad angle shot from the goal line wide beat Climie on the power play. With 5 minutes left in the game and fans preparing for OT, Warren Peters again came up with a goal on another in tight in the crease goal. With 2 minutes remaining in the period, Aaron Gagnon took a questionable tripping call from referee Kyle Rehman and Texas was down a man. Ryan Russell tied it up on yet another bad angle shot down low. The Stars would need to go beyond 60 minutes to decide Game 3.

And so we return to the unlikely hero, Ethan Graham. Just 2 minutes into the overtime period, Andrew Hutchinson, who already had two assists in the game, fed a pass along the blue line to Ethan Graham who drilled it for the final goal.

Texas has a few things to tighten up before Friday night. The power play was great for Texas, going 3/4 on the night. Texas gave up two power play goals on five opportunities though. Additionally, Texas had to battle back after giving up the first goal of the game within the first five minutes. "It was a gutsy win," said Jamie Benn, who had two points in the game, "the gritty goals are the ones we need."

Warren Peters on playing at home: "It's great here. If you look across the board, as far as attendance goes, we're right up there in the playoffs. That's a credit to the Cedar Park area and Austin and the people that support us. There's a lot going on this time of year, especially outside with the weather. We love the support. Coming home, it's loud all the time and it seems like they cheer no matter what. It really helps, especially when you're gassed and trying to fire yourself up."