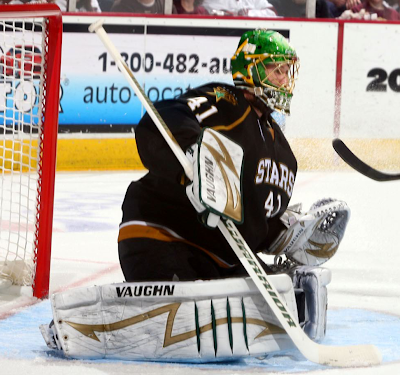 The day after the Stars loss in the Calder Cup Finals to the Hershey Bears, we already have off season movement. First, Dallas announced that they have signed Brent Krahn to a 1 year extension on his contract. It will be 2-way (meaning he can play in the NHL and AHL).

Here are both press releases:

The 6-4, 232-pound goaltender has played in 196 career AHL playoff games posting a 99-70-14 record including 19 shutouts. Krahn was drafted ninth overall by the Calgary Flames in the 2000 NHL Entry Draft.

Right wing Tyler Shelast did not receive a qualifying offer.

Teams are required to extend a one-year “qualifying offer” to any current restricted free agent by June 28 in order to receive the right of the first refusal or draft choice compensation should that respective player sign an offer sheet with another NHL club. The qualifying offers will expire at 4 p.m. (Central Time) on Thursday, July 15. Qualifying offers fall into three categories:

[Ed. Note: It is with a heavy heart that I announce the departure of staff writer Ryan Pennington from the site. Ryan is off to pursue career interests that will make it rather tough for him to continue coverage for 100 Degree Hockey. I cannot possibly say enough about how difficult it is to see him go, especially without a proper end-of-season sendoff. He was an excellent contributor, is a true professional, brought an amazing personality to our social presence (pig facts, anyone?) and has become an excellent friend as well. Please wish him the best in his future pursuits.]
In July of 2017, I emailed Stephen at 100 Degree Hockey with a modest proposal. I fancied myself a fairly decent writer at the time, and I was interested in developing that skill while learning the world of sports journalism. I was also madly in love with hockey.

I asked Stephen if he was willing to give me an opportunity to merge those interests with a potential writing role. A couple short months later, I found …

San Jose is in a spot right now where you have to ask: What isn't going right for them? They are the #4 ranked power play (24.1%) and the second-best penalty kill in the league (86.4%). Their combined PP+PK numbers are the best in the league at 110.5%. Usually teams strive to get this number to 110. Only San Jose and Grand Rapids are currently at or above the mark. Texas is at 94.2%.

Texas has a lot going on as this game comes up on the schedule. Julius Honka and D…

The Texas Stars have recalled goalie Landon Bow to Texas. Aside from injury, this doesn't make a lot of sense to me. The Texas Stars have little to play for at this point aside from a near-flawless run the rest of the way. Bow was solid in his time in the AHL, but he still went 7-7.

The Saint Albert, Alberta native has appeared in 16 AHL games with Texas this season. The undrafted Bow (BOH) was originally signed an AHL contract with Texas over the summer, and then signed an entry-level contract with the NHL’s Dallas Stars …