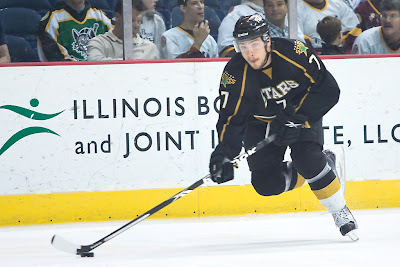 Colton Sceviour skates with the puck in Game 7 of the West Division Finals series against the Chicago Wolves (Photo credit: Chris Jerina)

Colton Sceviour was also out at development camp this past weekend. I got a chance to catch up with him briefly. Here are some quotes:

On his first season in the pros:

"Going in as a rookie, you never know what to expect. Going to the finals, that was unbelievable. It was a great feeling."

On his line in the playoffs:

"I really like [Benn and Gagnon]. They're really easy guys to work with. Very smart, very skilled guys, made the game really easy, I think. We had a fair amount of success."

On his goals for next season:

On living in Austin, Texas:

"I love the city. The weather's unbelievable. If I'm back there again next year, that's no problem. The city has so much to do and so much to see. We went out to Lake Travis there one of the last days after the season ended. It's like bath water out there. You jump in expecting a little bit of a rush and it's warm. It's nice. The whole area was unbelievable."