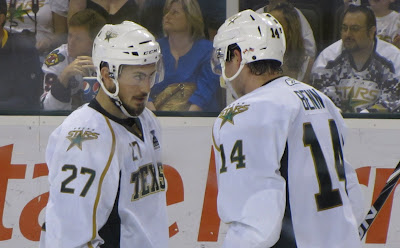 The Texas Stars announced today that they have re-signed Greg Rallo for 2010-11. I absolutely love the signing, as Rallo is a great two-way player who works in all situations (Even, PP, PK). Looks like he might need to sell that house in Boise. Here's the press release:

Cedar Park, TX – The Texas Stars announced on Friday that the team has agreed to terms with forward Greg Rallo for the 2010-11 season.

Rallo enjoyed career highs with the Texas Stars in 2009-10, scoring 19 goals and setting up 25 others for 44 points in 69 games played. The 6-foot, 195-pound forward finished third overall on the team in goals scored and fourth overall in points for the regular season. Rallo also helped the Stars to a Western Conference Championship this year with three goals and ten points in 24 Calder Cup Playoff games.

"Greg was an integral piece of our hockey team last season," said Texas Stars General Manager Scott White. "He is a solid two-way player who competes every night."

The 28-year old will enter his fifth full season of professional hockey this fall. For his career, Rallo has 30 goals and 37 assists for 67 points in 172 AHL games played. The former Ferris State University standout also played in 83 games for the Idaho Steelheads from 2005-2008, scoring 32 goals and dishing out 39 assists for 71 ECHL points.

The Gurnee, IL native made it to the Calder Cup Finals in 2010 with Texas and in 2009 with the Manitoba Moose. Rallo won the ECHL’s Kelly Cup in 2007 with Idaho.