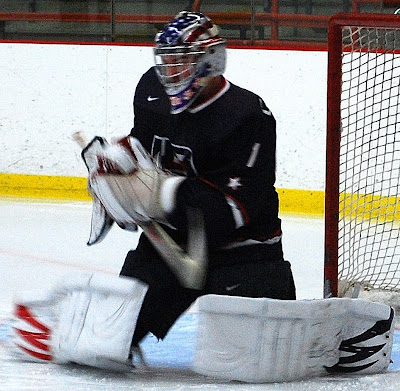 Jack Campbell making a save for the Team USA U-18 team. (Photo credit: Bhockey10)

The Dallas Stars had the 11th pick in last month's NHL Entry Draft and selected goaltender Jack Campbell out of the USA Hockey National Team Development Program. Stars fans are probably most familiar with Campbell in the context of this year's thrilling OT victory over Canada in the World Junior Championships. Campbell was at the Stars Development Camp this past weekend, and I grabbed a quick interview. Campbell will be playing in the OHL with the Windsor Spitfires this coming year. The Spitfires are coming off back-to-back Memorial Cups.

On being drafted by Dallas:

"I talked to Dallas a little bit before the draft. Not sure if it was going to be possible for me to go to such a great organization as Dallas. I've been following Marty Turco my whole life. When my name was called for Dallas, I really couldn't believe it. It was a shock to be honest with you. It was a great feeling, and I'm really excited about being a Dallas Star."

On the development history of great goaltenders from the Dallas organization:

"They've done a great job developing goalies. And the goalies, once they've gotten to the NHL, have had a great amount of success. Now with Coach [Mike] Valley here, he'll just continue that. I'm really looking forward to working with him all summer long to try to get to that next level and whenever they think I'm ready, hopefully I will be."

On playing with the Windsor Spitfires:

"It'll be a good season. Coach [Bob] Boughner and [Vice President and General Manager Warren] Rychel do a great job with that team. They've both won Stanley Cups, so learning from those guys will be great for my experience as well as playing 60 games next season and the NHL-type playoff schedule. I'm really looking forward to that, as well as playing with a great group of guys and hopefully bringing a third consecutive Memorial Cup to Windsor."

[Editor's note: This interview was recorded before Bob Boughner was hired as an assistant coach for the Columbus Blue Jackets on July 5th, 2010.]

On getting out to see Dallas:

"I've kind of looked around, saw the [Stonebriar] mall and everything. It's all just so new and so clean around here. It's just so great and nice to see."

Chaparral Ice has been part of the hockey community in Austin for over twenty years. Originally started by the Collins family, who wanted to see a place for their children and others in the community to figure skate, new ownership with a hockey background has reinvigorated the local rink and set out a plan to further grow hockey in Austin.

That story was a tough one and familiar to anyone in the local community. As recently as 2010, Chaparral Ice was a multi-rink facility, operating three sheets across two locations in Austin. Poor management, fines from the city and the economi…

The first big league callup for Richard Bachman comes as Kari Lehtonen is suffering from reported "lower body stiffness". Bachman will ride the pine behind Andrew Raycroft in Chicago and Tyler Beskorowany will get the start. It will be Beskororwany's second start in the AHL.

No word on the backup for Texas, but one has to assume that it will be a player local to Chicago given the short notice of the callup.

David Brown of the Quad City Mallards will be called in to backup Beskorowany. Confirmation from CHL transactions page.