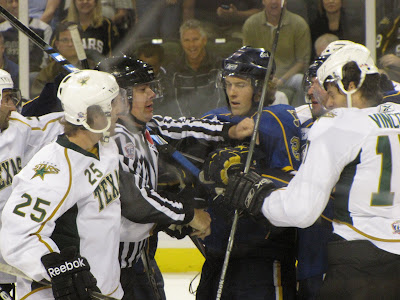 Texas really needed a win against Peoria. After two tough losses in the early going against Peoria, the last home game Texas has against Peoria this year needed to send them off on their road trip in a good way. Richard Bachman and a re-tooled power play unit gave them that win.

Texas played a solid game from start to finish this evening. Just 23 seconds into the game, Mathieu Tousignant threw down with Stefan Della Rovere. That energized the crowd and the Texas bench. Texas would draw first blood shortly thereafter on the power play. With Evans in the box for slashing, Dan Spang's point shot found the back of the net. It was Spang's first goal of the year. Francis Wathier dropped the mitts with Peoria captain Dean Arsene two minutes later to keep the energy up and leveled Arsene with a hit to the jaw.

Texas kept their balanced attack going with another goal in each of the remaining periods. Cody Chupp collected his first professional goal by walking into the Peoria zone and beating Ben Bishop on the shortside. Luke Gazdic and Tristan King assisted. And with time winding down in the game, Travis Morin tipped a point shot by Trevor Ludwig to make it a 3-0 game.

Richard Bachman was the number one star of the game and deservedly so. "You didn't see the huge highlight reel saves [from Bachman]," said Coach Gulutzan, "but he made the big saves when we needed them." It was Bachman's first start for the season and he was aided by knowing about the start a few days in advance. He had a 38 shot shutout but it is not his first AHL shutout, as he earned one against Hamilton in Ontario last year. Bachman was quick to deflect praise to his defense corps, "The guys were great in front of me: blocking shots, clearing rebounds, picking up sticks and letting me see shots. I think that was key to our success tonight."

Texas does not play Peoria again until January 15th and the Rivermen will not return to the Cedar Park Center again this regular season. "I think we've learned a lot playing [Peoria] in three games," commented Gulutzan. "I think that's good early, but I think psychologically getting that win was good."