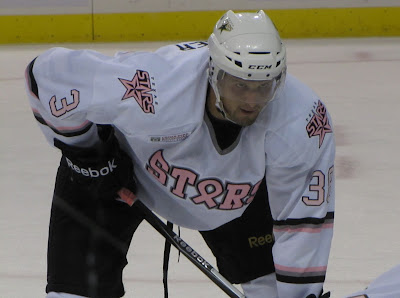 Francis Wathier prepares for a faceoff decked out in the Texas Stars pink uniforms for the October 30th game against Houston. (Photo credit: Brian Hackert)
The charity totals from the Texas Stars' recent Pink in the Rink event have been released by the team. Texas raised over $25,000 for Komen Austin and the Texas Stars Foundation, the teams charitable organization. Fans contributed via tickets sales to the tune of $10,616.50. Great job, Austin!

The Texas Stars hosted their first ever Pink in the Rink night on Saturday, October 30th at Cedar Park Center. In a game against the Houston Aeros, the Stars wore themed jerseys to promote breast cancer awareness. Local area survivors participated in game activities and the Stars hosted several fundraising activities with proceeds going to both Komen Austin Affiliate® and the Texas Stars Foundation. In addition to the jersey auction, many players used pink taped sticks during warm-ups which were also auctioned off. The Texas Stars Foundation, with the assistance of Texas Stars player wives and girlfriends, sold autographed Pink in the Rink pucks. The Texas Stars donated $2 for each individual or group ticket sold. In all, $10,616.50 of the net funds raised were donated to the Komen Austin Affiliate®.

The Texas Stars Foundation will present a check to the Komen Austin Affiliate® prior to the Stars home game on Friday, December 3rd at 7:30 PM as Texas will host the San Antonio Rampage at Cedar Park Center.

The Texas Stars Ice Girls participated as a team in the Komen Austin Race for the Cure® on Sunday November 7th. The Ice Girls were able to generate $942.85 in donations for the race. As presenting sponsor of the event, Cedar Park Regional Medical Center handed out pink aluminum water bottles to the first 2,500 fans who attended the game.

In the few days off between the regular season and the postseason, I wanted to take a few minutes (if you'd please) to get some information from you, the readers, about what you do and don't like about the site and what content I write here.

I've created a pretty short Google form, and I'd love you get your feedback.

Chirp me all you want in the free text boxes! Thanks.

The Stars penalty kill was the weakest link today as an 0-for-4 effort gave the Iowa Wild a 5-4 victory to end the 2019 calendar year. Texas battled back from three separate deficits to tie the game at one, two and four. However, another later power play for Iowa handed them the victory with 72 seconds left in the contest.

Joel L'Esperance continued his scoring ways with the opening marker for the Stars. Joel Kiviranta, Michael Mersch and Emil Djuse finished out the goals for Texas. Brad McClure notched his second multi-point game of the season with a two assist afternoon, and Joel Hanley did the same. Tye Felhaber had points in his second game in a row, assisting on Mersch's tally.

Texas will go to Chicago on Thursday night.