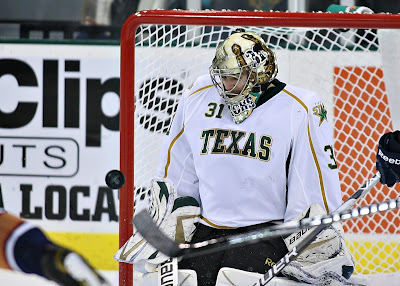 According to ESPN Dallas, Texas Stars goaltender Richard Bachman has been reassigned to the team after an extended stint in the NHL with Dallas. Bachman saw 10 minutes of action at the end of the Phoenix Coyotes game, stopping all four shots that he saw. Starter Kari Lehtonen is a "strong possibility" for Thursday's game against San Jose, an assertion that is bolstered by Bachman's reassignment.

Aaron Gagnon will also be returned from Dallas in time for Friday's game against San Antonio. Gagnon had 2 assists in 5 games played with Dallas and a plus-2 rating in an average of 7:56 of ice per game. Both Toby Petersen and Krys Barch look to be fully recovered and ready for Thursday's game.