Manitoba Breaks It Open In Third to Down Stars 3-1 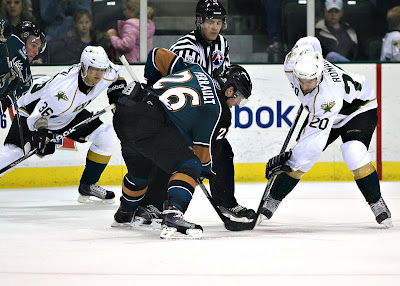 Ondre Roman digs in for a faceoff against Manitoba's Joel Perrault (Credit: Texas Stars/Byrd)
Texas came up against it tonight, facing a team without a win in 4 games and a forward without a goal in 19. Both streaks ended this evening as Marco Rosa snapped his 19 game skid against the Stars, scoring the game winner in the third period to drop Texas to 16-11-1-1.

Manitoba struck first in the game with a power play tally. With the Stars' Philip Larsen in the box for high sticking, Manitoba crashed the net after an initial shot nicked off both posts and out. Victor Oreskovich found twine on a mad scramble in front with Beskorowany not even in the crease. The goal came with only one second left in the penalty.

The Stars got it back on a similarly odd play in the Moose zone. Manitoba netminder Eddie Lack gave up a rebound on a Greg Rallo shot that bounced out to the front of the net and hit traffic to rainbow back over his head and into the net. Initially, it looked to have hit Wathier but the goal was changed to Rallo's. Assists went to Morin and Wathier. The shots were tied after the first period at 13.

The Stars and Moose picked up the pugilism in the second period but neither team yielded any goals. The period saw 24 minutes of penalty box time for the two teams together. All but two of the minutes were served in an offsetting manner. Luke Gazdic threw down with Tommy Maxwell in the period as well for his first fight in the last eight games.

To look at it, the third period was Texas's in most ways. They had 3 power plays, 19 shots on net and only allowed 3 against. However, it was indeed not the Stars period. Just under eight minutes in, Marco Rosa broke a 19 game scoring drought with a puck wired to the top right corner that beat Beskorowany clean glove side high. It was only Manitoba's second shot of the period. "We have to stop giving up third period goals," lamented Coach Gulutzan. "I thought their goalie was really good and they played with desperation to keep the puck out of the net." Moose goalie Eddie Lack finished with 39 saves on 40 shots and even had an assist.

Despite 75 seconds of 6-on-5 followed by 17 of 6-on-4, Texas could not make up the difference. The Moose's third and final shot of the period was an empty net goal to seal the loss for Texas at 3-1.

Tyler Beskorowany dropped his record to 2-4-0 in the loss and has now faced 155 shots in the last 5 games for Texas. It is a lot to ask of a young goaltender, but consequences beyond the Stars control force their hand. As to Beskorowany, he feels fine: "I played 68 games last year, so I'm used to the fatigue factor. I know how to take care of myself off the ice [because of that]."