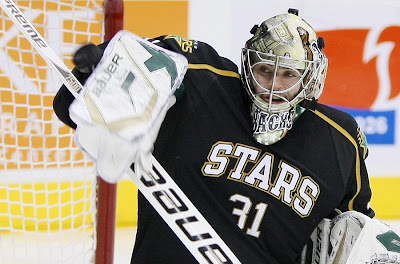 Richard Bachman deflecting one of the 41 shots he faced in Friday's game. (Credit: Darren Abate)
Deep in the bowels of the AT&T Center last night, I managed to catch up with goaltender Richard Bachman after his 41 save shutout performance against the Rampage. These quotes didn't make it in time for the postgame, so I wanted to share them here.

On facing 41 shots after a week off:

"It was nice to get out there again and have some fun and play some hockey. There were a lot of perimeter shots. We didn't really give up a lot of 'grade A' shots so it was a nice game to come back in to."

On San Antonio's lack of pressure:

"Our D did a great job hussling back and cutting off their rushes. We played it smart in the offensive zone also, waiting for our chances."

On playing in Phoenix:

"It was awesome. It was unbelievable. It's one of those things you dream about since you were a little kid. I remember when I was 5 years old wanting to play in the NHL. It was a great experience. I was a little cold there going in with 10 minutes left in the game but I really enjoyed it."

Bachman made the most of his NHL experience, stopping all 4 shots he faced from the Coyotes, San Antonio's parent club.
interviews