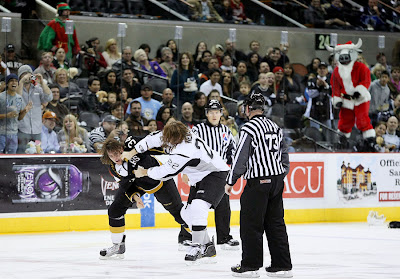 Luke Gazdic and Eric Neilson throw down in one of their two tilts on the night. Gazdic also had a goal and was named second star. (Credit: Darren Abate)
The Stars have been on a roll against the San Antonio Rampage, winning 3 of their 4 so far and getting a shootout loss in the 4th. Texas continued their good luck against the Rampage tonight on the road with a 3-0 victory against the first place team in the West Division.

Texas got outshot by a wide margin throughout the first period and the entire game. At one point, Texas had 3 shots to San Antonio's 11 and closed the period at 18-7. Despite the shot deficit, Texas had the lead after 20 minutes thanks to Luke Gazdic.

The Stars' newly configured fourth line of Gazdic, Roman and Backman potted the first goal of the game. Ondrej Roman and Luke Gazdic broke out of the zone for a 2-on-1 against the Rampage defense. Roman completed a deft pass to Gazdic, who buried the chance for his 4th of the year. The goal, which came late in the period, was not the only action for Gazdic, who also faced off against Neilson early in the period.

Texas opened the second on the penalty kill, with Travis Morin in the box for hooking at the end of the first. Just as Texas was coming off the PK, Francis Wathier was pursuing the puck in the Rampage zone on a strong forecheck and forced Joe Fallon into a stickhandling error, which Wathier absolutely crushed to set the score at 2-0.

The play, reminiscent of Wathier's shorthanded goal off Michal Neuvirth's error in the Calder Cup Finals, was not counted as a shorthanded goal, technically, but was one for all intents and purposes. It was Wathier's 10th of the year and came on only the 8th Texas shot of the night.

Luke Gazdic picked up another fighting major in the period against Eric Neilson once again. The Stars ended the period with only 13 shots to the Rampage's 30.

Richard Bachman and the Stars closed it out in the third period strong. Texas was still beaten on shots in the period, but by a closer margin. The Rampage didn't really come on in terms of a cohesive offensive effort until the very end of the game when they spent some extended time in the Texas zone. Ray Edwards pulled goalie Joe Fallon with 3 minutes left in the game as San Antonio pressed in the zone.

Texas managed a clear and Greg Rallo collected his tenth of the year on an empty net goal with assists from Brunnstrom and Larsen. The upset Rampage fans, who were waiting for the first San Antonio goal to launch teddy bears on to the ice, started frustratedly raining their stuffed donations down upon the surface.