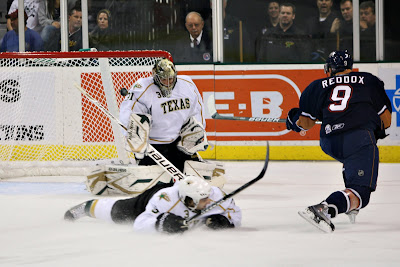 After Saturday's deflating loss, Texas had a chance take a solid playoff spot with tonight's game. The Stars 4-3 win this evening leapfrogged them over Milwaukee and set them up to go to the Christmas break in 3rd place. The Stars had set a goal of being in a playoff position after this last 4 game stretch. "We like to break the season into mini-segments like that," said Coach Gulutzan. "And we accomplished our goal [for this segment] tonight."

Texas had a heck of a first period, exactly the way the team would want to start the game coming off the loss to Hamilton. Aaron Gagnon scored his second in as many games on a fat rebound off Jeff Deslauriers' left pad. The initial shot came from Francis Wathier, and Cody Chupp collected the secondary assist.

The period was a stark contrast to this weekend's contests in terms of penalties. Twelve minutes were handed out in the first, creating 4 power plays for OKC and 2 for Texas. With Trevor Ludwig in the box for slashing, Jeff Deslauriers stopped a puck in his own zone at the right wing circle and hesitated a little too long in figuring out what to do with it. He fed it directly to the tape of Colton Sceviour who potted the "easiest goal he's ever scored", according to the winger. It was his fifth of the year.

Francis Wathier kept things going for the Stars in the second. With Texas on yet another PP, Rallo's point shot was tipped by the left winger in front of the net to make it 3-0. OKC got it back shortly thereafter on their own power play, scoring in a similar fashion, Chris McDonald tipping a Shawn Belle shot. Texas ended the period 3-1 and outshooting the Barons 18-11.

Scoring heated up even more in the third period as Texas's final period blue continued to haunt them. OKC scores on a garbage collection goal from Greg Stewart 2:35 into the period. Texas seemed to have the edge when Maxime Fortunus blasted a pointshot that was tipped in front by Ray Sawada to make it 4-2. The power play goal looked to have salted away the evening, but more power plays were coming.

Shawn Belle made short work of a Barons power play halfway through the period, scoring on a floating wrister from the point just 13 seconds into the power play. Texas looked like it was in trouble. "We've been focused on hunkering down," said Sceviour. "Always having a high guy, making sure we're not turning pucks over, and not feeding into their transition too much."

OKC continued to press and eventually pulled their goalie. Coach Gulutzan assured his troops that "it always gets hairy when the goalie is pulled" but stressed to his guys to maintain their composure and continue to play their game. The Stars locked it down to earn Richard Bachman his 11th win of the season. Texas ended the game with a 29-23 shot advantage and held OKC to their lowest shot total of the year.