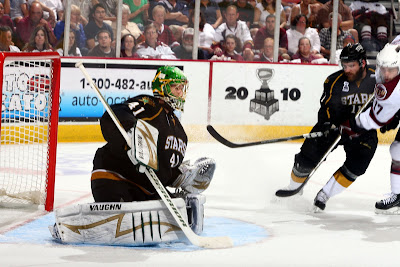 Brent Krahn in last year's Calder Cup Finals. (Credit: Just Sports Photography)
Goaltender Adrien LeMay was returned to the Allen Americans today. Stars goaltender Brent Krahn is now likely to come off the bench. The former first round draft pick has not seen game action since November 10th. Texas is in action again this Friday in Houston. Richard Bachman has started 16 of the last 18 games for Texas, so Krahn will be likely to get some action soon.

LeMay returns to Allen after his third AHL recall this season. The rookie netminder dressed, but has not made an appearance for Texas this season. In 17 games for the Americans this year, LeMay is 11-2-0 with a 3.10 goals against average and a .897 save percentage.