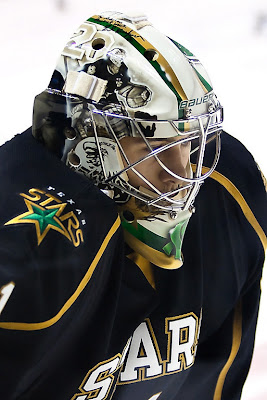 Adrien LeMay in warmups for the Stars during a December 11th game in Milwaukee. (Credit: Chris Jerina)

Texas has made a few moves today in the system. First, defenseman Guillaume Monast has been sent down to Idaho. Personally, this signals good things for Severin Blindenbacher's condition. Blindenbacher was skating last week, and the send-down of Monast could mean that he is ready for action this week.

The call-up of LeMay is a little more curious. With the addition, Texas now has four goaltenders on their roster: Bachman, Krahn, Beskorowany, and LeMay. Remember that Krahn is still on the roster since the AHL does not have an injured reserve system due to a lack of salary cap.

It is unlikely that Texas will continue to carry 4 goalies, which means someone is either injured or being sent down. Richard Bachman would be the first one to look at since he didn't play in the last game, but that's unlikely as he did sit on the bench in Peoria. The Stars would have signed an emergency backup if he had been injured. That was simply a case of giving Beskorowany a quality start.

And that's probably the issue: quality starts. Look at Tyler Beskorowany's stats in the AHL. The second rounder from Dallas has played a total of 119 minutes in the last 30 days. Granted both were wins, but I've discussed before both here and at DefendingBigD.com that a player like Beskorowany needs quality minutes to continue to develop. That's what Richard Bachman got last year in Idaho and look what that's done for his development.

It is uncertain at this juncture what the situation will be for tomorrow night's game against the Griffins. If Beskorowany is sent down, it's nothing against him; he just need starts.

The Texas Stars announced on Monday that defenseman Guillaume Monast has been reassigned to the Idaho Steelheads, Texas’ ECHL Affiliate. The Stars also announced that goalie Adrien LeMay has been recalled from the Allen Americans of the Central Hockey League.

Monast has played in three games for Texas over two separate recalls from Idaho. He has yet to register a point with the Stars this season. In 30 games for Idaho this year, Monast has one goal and four assists while adding 20 penalty minutes. The Quebec native spent his rookie season with Idaho, setting up six goals in 68 games played, helping the Steelheads reach the 2010 Kelly Cup Finals. Monast attended training camp in Dallas and in Texas each of the last two years.

LeMay returns to Texas for the third time this season. The rookie netminder has not made his AHL debut. In 17 games for the Americans, LeMay is 11-2-0 with a 3.10 goals against average and a .897 save percentage.