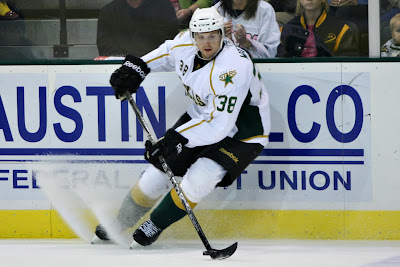 Francis Wathier in a December 20th game against the OKC Barons (Credit: Texas Stars)
The AHL announced today that Francis Wathier has been named as an injury/callup replacement to the AHL All-Star game. Travis Morin will miss the game, presumably staying in Dallas.

It was announced today that Morin has been reassigned to Texas after making his NHL debut in Dallas' 3-1 win over Edmonton last night. He will likely get into the two games this weekend for Texas (at OKC and v. ABB) and then be recalled in time for Tuesday's Dallas game against Vancouver. Because the All-Star game is on Monday in the AHL, that precludes his participation.

Tangradi, a second-round draft pick by Anaheim in 2007, is tied for the Wilkes-Barre team lead with 17 goals and has totaled 29 points in 40 games for the Penguins in 2010-11. He has also recorded a goal and an assist in nine NHL games with Pittsburgh.

Bortuzzo, a third-round draft pick by Pittsburgh in 2007, has two goals and 16 assists in 45 games for Wilkes-Barre/Scranton this season and is tied for third among AHL defensemen with a plus-17 rating.

Among AHL rookies, Olver ranks second with 18 goals and sixth with 29 points while skating in 45 games for the Monsters. He also has two assists in four NHL contests with Colorado.

Wathier, a member of the Dallas organization since turning pro in 2005, has 12 goals and 10 assists in 42 games for Texas this season. He also appeared in one NHL game with the parent Stars.