Gagnon, Wathier Called Up To Dallas 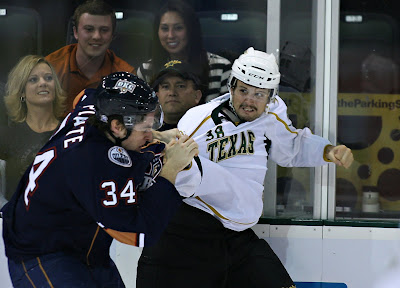 Wathier dukes it out with Plante of the OKC Barons in a November 30th contest. (Credit: Byrd/Texas Stars)
Mark Stepneski reports this morning that Aaron Gagnon and Francis Wathier have been called up to Dallas. Adam Burish and Brian Sutherby are on the mend for Dallas, which necessitated the callup.

Gagnon has played in 7 NHL games this year with 2 assists to his name. Wathier has yet to dress for a Dallas game this year but played in 5 games last year.
dallas stars roster moves