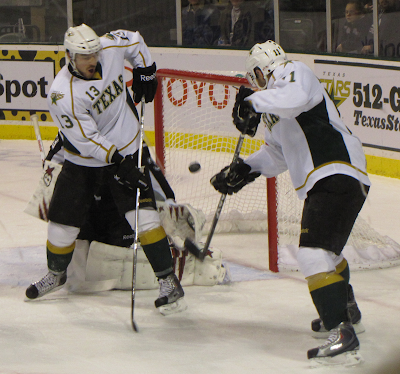 Aaron Gagnon tips home a Greg Rallo point shot to take the 1-0 lead in the first period. Ray Sawada blocks out his former roommate, Matt Climie. (Credit: Brian Hackert)
In the crowded West Division, Texas needed to start gaining some separation with the San Antonio Rampage coming to town. "We have to make sure we get our points, however we can get our points to stay in that hunt," said Greg Rallo who had two goals and an assist in the game. With Texas's OT win, there are now 2 points separating 1st place from 6th place. In all, there are four teams with 56 points alone. As Colton Sceviour said on Saturday, this division might come down to the last weekend.

Texas came out shooting in the first period, at one point outshooting San Antonio 15-3. Texas drew first blood on the PP with just over 2 minutes left in the first. Greg Rallo's point shot was going high and wide right when Aaron Gagnon tapped it down on one of the nicest deflections I have ever seen. The deflection, made from practically on the goal line, hit the far and near posts in succession and rattled in to give Texas a 1-0 lead.

The power play giveth and the power play taketh away as well. With Michael Neal in the box, San Antonio got a PP goal of their own. Maxime Goncharov tapped home a puck that dribbled off Bachman's pads and sat on the goal line. Everyone on the ice seemed to have thought that Bachman had the puck. The goal was scored with 8 seconds left in the period. Shots advantage was Texas' with 19 to SA's 13.

The Rampage jumped ahead in the second when Alex Picard roofed a puck over Richard Bachman top shelf from just a foot out. Texas had a few power play opportunities in the period but could not convert to tie it up. Shots were vastly in their favor in the second as well at 13-5.

From there on out, it was all Stars. With time dwindling, it was Greg Rallo with his 14th of the year. Jordie Benn's point shot ticked off a San Antonio shinpad and right to Rallo just left of the net. He tipped it in to tie things up. With just under a minute left in the period, Texas was awarded a power play. The Stars couldn't finish it in the last 57 seconds of the period and went to OT.

And again, it was Greg Rallo. Rallo, from the left wing faceoff dot, fired a laser beam of a shot off a pass from Aaron Gagnon to pick up the second point for the Stars. The power play goal was Rallo's 15th goal of the season and his 3rd point of the night.

In all, Texas threw 40 recorded shots at Matt Climie. San Antonio had 18 blocked shots in the game as well. Matt Climie played extremely well and his play plus blocked shots helped to earn San Antonio the point in regulation. Of the shot count, Aaron Gagnon commented, "We've got to get more pucks in the trenches. We aren't the most skilled team; we don't score highlight reel goals. The more we throw pucks at the net, the better odds we're going to have."