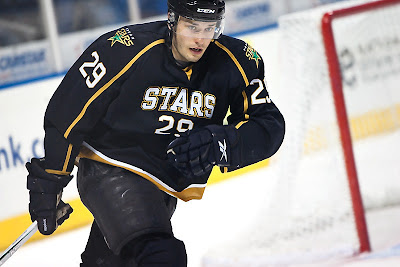 Brunnstrom in a 12/11 game against Milwaukee. (Credit: Chris Jerina)
Dallas has traded Fabian Brunnstrom to the Toronto Maple Leads for right winger Mikhail Stefanovich. Stefanovich is currently playing the KHL (Russia), and I would bet will never wear a Stars jersey. It looks like this was a salary dump: plain and simple.

Fabian Brunnstrom, despite picking up points in the AHL, had run out of time to develop inside the Stars organization. With the pick up Jamie Langenbrunner's salary, Dallas needed a salary dump. Fabian's one-way salary of $675,000 in the AHL wasn't cutting it for the Stars, and they got him off the books.

It is disappointing for fans in Cedar Park, where Brunnstrom had just recently begun to catch on fire. After a slow start, Brunnstrom had seven points in his last six games. His lineup with Morin and Rallo was really clicking, but now Coach Gulutzan will have to find another winger for the two. It feels a lot like the Ivan Vishnevskiy trade to me, because of the fact that Texas gets nothing in return. At least with Vish, Dallas got Lehtonen. In this case, there is no silver lining for Texas hockey fans.

The Dallas Stars announced on Thursday that the club has traded left wing Fabian Brunnstrom to the Toronto Maple Leafs in exchange for right wing Mikhail Stefanovich.

Stefanovich, 21, has played 15 games with Minsk Dynamo of the Kontinental Hockey League (KHL), recording one goal and two penalty minutes. The Minsk, Belarus, native, dressed in two games for the Toronto Marlies of the American Hockey League (AHL) going scoreless and appeared in four games for the Reading Royals (ECHL), collecting five points (3g, 2a) this season.

The 6-2, 202-pound right wing skated three seasons in the Quebec Major Junior Hockey League (QMJHL) for the Quebec Remparts, tallying 210 points (106g, 104a) in 171 games for the club. Stefanovich also recorded 36 points (18g, 18a) in 36 career QMJHL playoff games with Quebec. He was Toronto’s third round selection (98th overall) in the 2008 NHL Entry Draft.