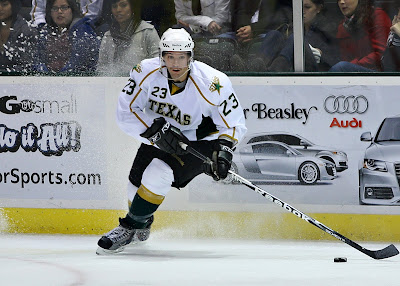 Morin in a game against Oklahoma City this year. (Credit: Byrd/Texas Stars)
Texas Stars center Travis Morin has been selected to start the AHL All-Star Game for the Western Conference. The Minnesota native, who celebrated his 26th birthday on Sunday, will be on a line with Alexandre Giroux and David Deshairnais to start the game.

Morin is having a career year with 13-17-30 through 38 games, leading all Texas scorers. His skill and execution have mostly been under the radar for Stars fans, however. Quietly, he has put together one of the most complete games in the Stars lineup. Luckily, he was appropriately recognized by the league today for his excellent play this year.

Morin was signed to a one-year two-way contract with Dallas this summer. The All-Star game will take place January 31st at 6:00 PM CST. Television plans have not yet been announced.

Full roster announcement can be found on TheAHL.com.
allstar