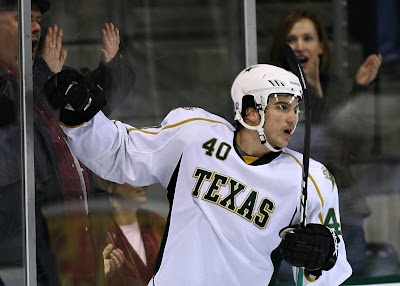 The AHL announced today that Mathieu Tousignant has been suspended for two games for his actions in the game against Grand Rapids on Tuesday. Tousignant will miss this weekend's games against Houston and Milwaukee.

The hit occurred in neutral ice late in the third period. Griffins' captain Jamie Tardif and Tousignant were skating out to the Griffins' end of the ice shoulder-to-shoulder. Tardif attempted to cut across Tousignant and Mathieu lowered his shoulder and apparently made contact with Tardif's head as the primary contact point.

We've heard a lot about headshots in the NHL so this suspension for the head as the primary point of contact does make sense. I personally missed the hit live because it trailed the play. Tardif took a roughing minor for retaliating after the hit.

As a result of the suspension and callups yesterday to Gagnon and Wathier, Texas is down 3 forwards. The Stars recalled Michael Neal, brother of James Neal, from Idaho today to remedy that.

Working off the list of forwards from the last game, here's what we have now:

That leaves Texas with 11 forwards. Texas will need to call someone else up (King, most likely) or play with a 7th defenseman (Stephenson or Blindenbacher).

Here's the release from the AHL:

The American Hockey League announced today that Texas Stars center Mathieu Tousignant has been suspended for two (2) games as a result of his actions in a game vs. Grand Rapids on Jan. 18.

Tousignant was suspended under the provisions of AHL Rule 28.1 (supplementary discipline).