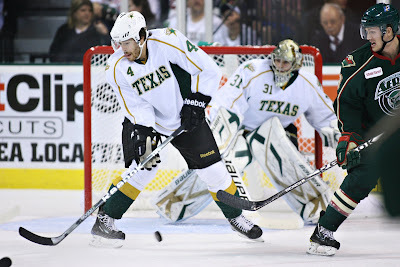 Blindenbacher in December 4th game against Houston (Credit: Byrd/Texas Stars)
Severin Blindenbacher's scratch on Saturday may have been a lead up to this. Blindenbacher has decided that he will return to Europe after spending 26 games with the Texas Stars this season. He hoped to crack the NHL roster with Dallas but was plagued with injuries this season, preventing him from doing so. He will return to Europe where the less physical style of the game there will surely help his injury issues.

Stars GM Joe Nieuwendyk said today that Blindenbacher has left the team and plans to return to Europe.

Blindenbacher was signed to a free agent contract in the summer and was hopeful he could make the NHL roster. However, he never played an NHL game and battled injuries with the Texas Stars. He played in 26 games and had a goal and nine assists.

"It's been a rough season for him with the concussion and everything, and he just decided it wasn't working out," Nieuwendyk said.