Cleveland Not Kind As Stars Fall 4-2 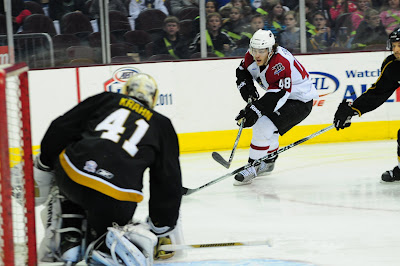 Cleveland was not kind to the Texas Stars in the first two games of their season long eight game road trip. With two prime opportunities to gain ground on the West Division's leaders, Texas faltered for a second time today.

Texas is self-admittedly not the most skilled team and Coach Gulutzan plays a defensive style. Goals for need to be timely and goals against sparing. Special teams also need to be a key to success. In the last two games, Texas has gone 0/8 on the power play including a five minute major and allowed 2 on 7 opportunities. It has to improve.

Matt Ford opened the scoring for Lake Erie halfway through the first period on a nice backhand to the forehand move. The Monsters outshot the Stars 15-10 in the period despite three power plays for Texas.

David Van der Gulik opened up a 2-0 lead for the Monsters on the power play in the first three minutes of the second period. Michael Neal answered the goal with one of his own 40 seconds later. The rebound goal off of Guillaume Monast's shot was Neal's 3rd goal of the year and Monast's first AHL point.

Things went from bad to worse in the third period as Matt Ford and Joel Chouinard opened up a 4-1 lead for Lake Erie. Dave Bonk got another goal for the Stars but the comeback was not to be. Luke Gazdic and Greg Rallo assisted on the goal.

Francis Wathier is healthy but simply did not make it to Cleveland in time to dress for the game. He was coming in from Alberta.