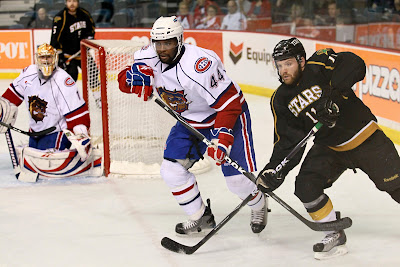 Gagnon in last year's Western Conference Finals against Hamilton (Credit: Matt Kostek)
Aaron Gagnon has been returned to the Texas Stars today and could be available for tonight's game in Peoria. Gagnon was recalled due to all of the injuries in Dallas. Through some CBA wizardry, Dallas did not have to send Gagnon through waivers in order to assign him to the AHL. His callup occurred under what is called an "emergency callup", which happens due to injury. The Stars special teams units will definitely appreciate his return, as will the score sheet. Aaron has only played in 35 games for Texas this year but is just better than a half a point a game player.
dallas stars roster moves