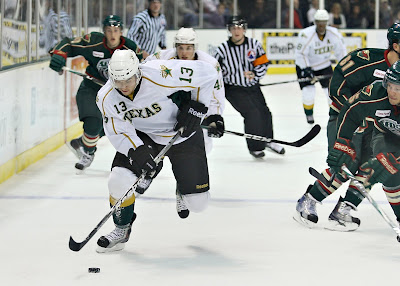 Ray Sawada skates with the puck in a December 4th game against Houston (Credit: Byrd/Texas Stars)
Winger Ray Sawada has been reassigned to the Texas Stars after being taken off the injured reserve in Dallas, according to Mark Stepneski. Sawada suffered a shoulder injury in his lone NHL game this season. The hit by Dan Paille earned him a four game suspension.
dallas stars roster moves

Julius Honka on Personal Leave; Jordan Kawaguchi Done for the Year After Surgery

Julius Honka (Credit: Andy Nietupski/Texas Stars) Even the most casual observer of the Texas Stars lineup will have noticed a gap in the blue line as Julius Honka has not dressed for the club since April 3rd. 100 Degree Hockey can now report that Honka is back home in Finland, on leave from the team due to a personal family matter, and will not return this season. There were no further details given regarding the nature of the leave. Among other notable lineup absences, Jordan Kawaguchi is done for the season after sustaining an injury in just his third pro game. He underwent successful surgery and is not with the team, instead focusing on his finals at the University of North Dakota. He is expected to be ready for the start of Dallas's main camp in September, if not before. Other notes: The decision not to have a traditional playoff or even a tournament was about the mental break as much as economic. Most teams have been running things like a season-long road trip in terms of who

Texas Finishes Off Weekend with Five of Six Points Against Monsters

(Credit: Andy Nietupski/Texas Stars) A big offensive effort and a tight overtime game handed Texas three of four points to end the weekend and closed their series with the Monsters at five points total. The sequence is their first three-game points streak since March 6-12 and puts them one game shy of .500 hockey. "I thought we got better as each period progressed," said coach Neil Graham of the Sunday matchup. "You want to be greedy but five of six against any opponent is very successful. We wanted to reset and get back to a lot of things structurally." Saturday night's game had Texas in the driver's seat pretty much the whole way through. The Stars never trailed and, after weathering a 16 shot barrage in the first, got up 3-1 on Cleveland and never looked back. Riley Damiani and Anthony Louis each found the scoreboard for the eighth time while Dawson Barteaux scored his first pro goal. Adam Scheel got the win on his birthday, stopping 32 of 34.  With the

(Credit: Texas Stars) Through this weird and winding COVID year, we've finally found ourselves at the end. Tonight's game marks the final home series of the season for the Texas Stars. They sit one game below .500 hockey at home (6-7-3) and one game below overall as well.  The Roadrunners, who looked formidable when Texas faced them in March, have faded. The Stars' series against them was actually the beginning of the unwinding. After losing three straight to Texas, Tucson is 7-12-2 since. Somewhat ironically, Texas is 7-12-3 since the same meeting. Texas looks to close the year with some positivity towards the future in the lineup as well. Despite the loss of Jordan Kawaguchi to season-ending surgery, recent college free agent signing Adam Scheel is joined now by 2020 first-round draft pick Mavrik Bourque on an ATO. Bourque's major junior league, the QMJHL, was the only one of the three able to successfully play a season. He had 43 points in just 28 games for the Shawi