Stars Fall To Houston In OT 4-3 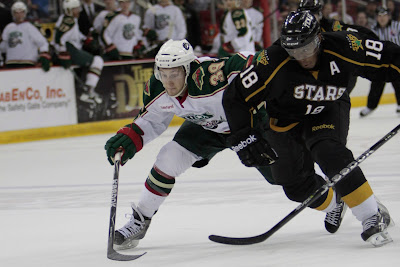 Texas travelled to Houston this evening, not stopping at home in between, to face off against the Aeros. Tonight's game was no exception to the season-long trend: tight games that Texas somehow ends up on the wrong side of. However, Texas managed to take a point out of tonight's game by taking it to overtime, leaving their record against Houston this year at 1-6-2-1.

The Texas Stars got things off to a quick start in this one. Just 45 seconds into the game, Francis Wathier scored on a wrap around to take the 1-0 lead. It was a good sign for Texas, as both teams are very good when scoring the first goal.

Unfortunately, the Stars would give it back twice over before the end of the period. Defenseman Nate Prosser scored his 7th of the year to tie it at 1 just past the halfway mark of the period. Less than two minutes later, Texas got in penalty trouble, and it was Jon DiSalvatore with his 14th of the year on the power play. Shots were in Houston's favor after one at 14-13.

Texas tied it up in the second period in the frame's only scoring. With six minutes left in the period, forward Luke Gazdic potted his 8th of the year, tapping it in from the back door after an initial shot by Dave Bonk. The Stars sent 17 shots at Khudobin in the middle frame and led 30-25 after two.

On the power play, Jordie Benn slammed one home from the point to go ahead 3-2 with 9 minutes left in the third period. DiSalvatore, who was in the box for Benn's goal, made up for his indiscretion by scoring on a nice tic-tac-toe play with Wellman and Patrick O'Sullivan. It was the captain's second of the night; seven of his 15 on the year have come against Texas.

While Texas battled hard all night long, the game would be Houston's. A late 3rd period power play bled over into overtime where Casey Wellman won it on a top shelf goal.