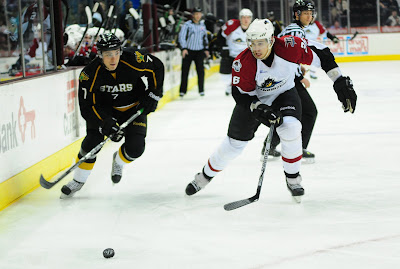 Colton Sceviour and Monsters defenseman Scott Langdon chase down a puck in tonight's game in Cleveland. (Credit: Ben Hall/Lake Erie Monsters)
In a night where no other AHL teams were in action, it was the Texas Stars chance to make the most of their games in hand with a win over the Lake Erie Monsters. Despite 34 shots on Jason Bacashihua, Texas could not get past the Monsters. Ultimately, it was the power play that dropped the game for Texas. A five minute major power play for the Stars should have been a big momentum builder, but instead killed the momentum as the Stars struggled to even get setup.

Lake Erie opened the scoring in this one with David Van der Gulik tapping home a rebound off a Scott Langdon shot. Langdon was just recently signed to a PTO and actually has played for the Allen Americans for most of the year. The assist was his first point in the AHL.

To close the period, rookie Mark Olver took an ill-advised major penalty for spearing Mathieu Tousignant. Spearing is also an automatic game misconduct. Olver, the team's second leading scorer, was lost for the game and Texas had 5 minutes with a clean sheet to work their PP. The Stars did not manage a single shot in the PP and took until mid-period to earn their first of the middle frame.

The Monsters scored again to put Texas in a 2-0 hole just eight minutes into the period. Travis Gawryletz collected his third of the year on a wrap around while Van der Gulik picked up his second point of the night with a primary assist. To close the period, however, Dan Spang jumped up on the play in the Monsters zone and collected a rebound from a Toby Petersen shot to put Texas on the board.

The Stars got themselves in penalty trouble in the third period with Luke Gazdic taking a high sticking minor, followed shortly by Greg Rallo for tripping. Texas managed to kill the 98 second long 5-on-3 and swing the momentum in their favor. The momentum swing would be short-lived as Texas went on the PK themselves and Ryan Stoa scored the first PP goal of the night by either team.

With Richard Bachman off the ice for the extra attacker, Dave Bonk would score his first goal with the Stars with just 9.4 seconds left in the game. Coach Gulutzan took the timeout to gather his troops and develop a strategy for the last few ticks, but it was the Monsters' night ultimately as the puck trickled harmlessly in on Bacashihua to end the game.

Technically, Blindenbacher was a scratch tonight, despite his decision to leave the team.