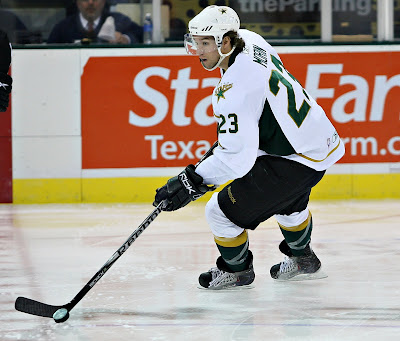 The callup of Travis Morin among others puts Texas in a precarious position as the stretch run begins. (Credit: Texas Stars/Byrd)

Back in August when the schedule came out, we all looked at February and said "not again". The Stars would once again play 14 games in the shortest month of the year. Last year's schedule saw the Stars play 14 in 27 days, including a 5 game road trip to the northeast. This year's schedule will see Texas in 14 contests in only 24 days, including two 3-in-3s and a season-long 8 game in 13 day road trip.

After today's callup announcement, Texas will have many of their regular contributors in the NHL or the press box to start the month. Injuries to Scott McCulloch and Maxime Fortunus deplete the lineup significantly. Fortunus's injury has been confirmed as lower body, and his day-to-day status is certainly encouraging for Stars fans. McCulloch is also lower body, but he is farther away from resuming skating.

Meanwhile, injuries to Tom Wandell and Jamie Benn have put Aaron Gagnon, Travis Morin and Ray Sawada with the big club. The three veteran forwards combine for an average of 1.7 points per game for Texas and knock out an entire lines-worth of players for Coach Gulutzan. It will be all hands on deck and then some on Friday as Michael Neal and Cody Chupp will likely be pressed into action from the press box.

Additonally, Aaron Gagnon played his 10th NHL game of the season last night against Vancouver, which means he would have to pass through waivers to return to Dallas. If Texas ever gets the centerman back, don't expect it to be before the trade deadline. He may be the straight-up replacement for Wandell in the lineup.

Adding insult to injury is the Stars' divisional race. There are only two points separating first from sixth. Texas is in sixth by points but by points percentage, Texas ranks 2nd in the West Division, just behind Milwaukee. Save for the Admirals, Texas has at least one game in hand, and as many as four, against every team above them. This is the right time to hit your stride and go streaking.

Last year, Texas went 5-9-0-0 in the month. The Stars' February 2010 was bolstered by winning streaks to end January (5 games) and to start March (3 wins, wins in 7 of 8). Ten points in February is not going to get it done in the West Division this year. Such a record would drop Texas to a .557 points percentage and from 2nd to 6th in the rankings.

It is extremely likely that 5th place in the West will make the playoffs by moving over the North Division. Sixth place, however, will be scheduling tee times come April. Without a doubt, the next four weeks will define the season for your Texas Stars.
analysis

Dallas training camp in 2017 in Cedar Park (Credit: Texas Stars) The hockey season is rapidly approaching, and the Dallas Stars announced today their schedule for training camp in Cedar Park. The team opens their season with an on-ice session Thursday, September 22nd at the H-E-B Center. This go around, fans may attend the training camp for free but must reserve tickets in advance at this site . The Stars Squad will be on hand to create a party atmosphere before each session as well. The team will conclude training camp in Cedar Park with a scrimmage on Saturday at noon before they begin their preseason slate on the following Monday at home against St. Louis. Here's the release:  The Dallas Stars will hold training camp at H-E-B Center at Cedar Park from Thursday, Sept. 22 through Saturday, Sept. 24. H-E-B Center at Cedar Park is the home of the Texas Stars, Dallas' development affiliate in the American Hockey League (AHL). The practices on Thursday, Friday and Saturday are ope