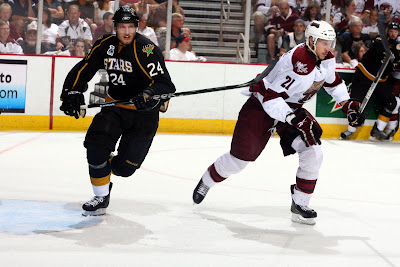 Trevor Ludwig in last year's Calder Cup Finals (Credit: JustSports Photography)
Mark Stepneski reports today that defenseman Trevor Ludwig is getting his first NHL callup to Dallas. With Nicklas Grossman out of the lineup, the 25 year old Wisconsin native will travel to join the Stars in western Canada today. I would expect that Niskanen slides into the lineup, and Ludwig is a healthy scratch. When you're on a road trip though, it's always good to have bodies.

Speaking of road trips, the Stars are now down to five healthy and available defenseman with the callup of Ludwig, departure of Blindenbacher, and injury to Larsen. Coach Gulutzan said Larsen was out for ten days from Saturday, so I would expect that a call to Idaho is in order. Guillaume Monast has played a few games with Texas already this year, but there are travel concerns to think about. Monast, or whoever is called up, will have to be with the team by today due to the early game tomorrow. I will update when I know more.