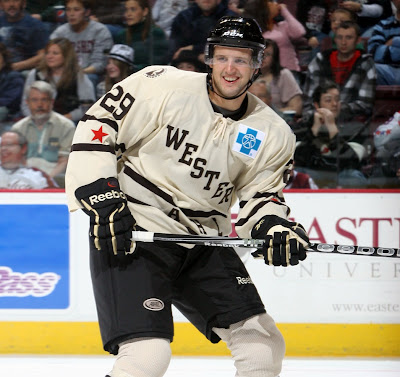 Francis Wathier cracks a grin in last night's All-Star game in Hershey, PA. (Credit: JustSports Photography)
Despite a loss by the West, the Texas Stars' All-Star representative, Francis Wathier, made Central Texas proud with his ASG performance. The gritty winger scored two goals on just three shots and was plus-2 overall in the game, which means that he wasn't on the ice for a single one of the Eastern Conference's eleven goals.

It was great to see Wathier back-checking at several points during the game, something that typically isn't done in the All-Star game. Hard work and doing the right thing just seem to be so much a part of Francis's game that I'm sure it was only natural. Wathier and the Stars are off until Friday's game in Houston.
allstar