The Stars and Moose close out their season series this afternoon in Winnipeg. For Texas, being idle was as bad as it could have been. The Stars actually managed to move up in points percentage ranking from 4th to 3rd despite losing an actual ranking spot, dropping from 4th to 5th. San Antonio's loss to Houston did the trick.

The Stars need to be looking for losses from San Antonio, Peoria, Oklahoma City and Chicago, as those are their most likely competitors for the last few playoff spots. Houston has pulled away from the rest of the division and is likely uncatchable at this point. Milwaukee, Houston and Rockford regulation wins over their remaining divisional opponents are what the Stars need to hope for. 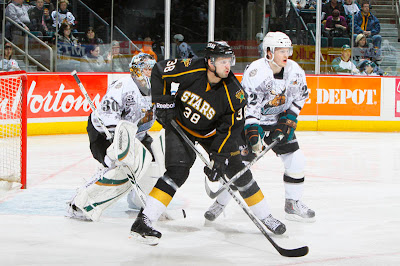 Since the last game, Manitoba has called up Victor Oreskovich. There is no word from Dallas right now on if a defenseman will be recalled. Nicklas Grossman and Karlis Skrastins both left the Stars' shooutout loss to Philadelphia early. Who is the first call? It depends what they need. Larsen would be the obvious choice, since he is the top defensive prospect in the system. Fortunus would be another possibility. With the departure of Blindenbacher, that is the practical end of the list. Trevor Ludwig could see a callup potentially as well. He was called up earlier in the season but did not play.