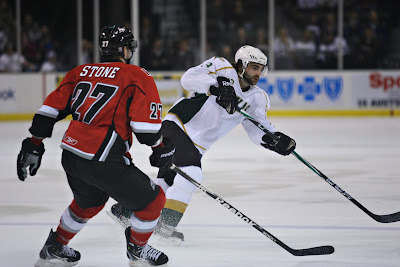 Dan Spang mans the point in tonight's game (Credit: Texas Stars)
Texas fell victims to rough scheduling and some players acting as "passengers", according to Coach Gulutzan, in tonight's 5-3 loss to Abbotsford Heat. The Stars were playing their 5th game in 7 days and came out flat for the first period. "Tuesday games after 3-in-3s are always tough," said Gulutzan. "The schedule really stunk." However, Coach Gulutzan didn't believe it was the schedule that was to blame for the slow start.

"I thought we had some guys who didn't show up and they're guys who haven't played heavy minutes," said Gulutzan. "If I had a do-over here, I'd probably insert a couple new guys in the lineup."

Texas's evening got off to a less than great start with the Stars allowing the first three goals of the game in just over five minutes. Stefan Meyer, Cam Cunning and Ales Kotalik made it 3-0 by the 14 minute mark of the first.

Greg Rallo got the comeback started with a laser beam from the high slot on a drop pass from Brandon Segal. Texas' Luke Gazdic then took a nasty hit to the head from Ryan MacMurchy, generating a five minute major power play for the Stars. Gazdic returned to his skates and played the rest of the game. Texas scored on the major penalty with Brad Lukowich sneaking down from the left point to poke in a cross-crease pass from Aaron Gagnon. Texas would close the period at 3-2 but with a shot deficit of 19-8.

Logan MacMillan continued the scoring for Abbotsford in the second period, opening up a 4-2 lead for the Heat. After killing a Heat power play, Texas's Aaron Gagnon had a break away chance with Francis Wathier trailing. Gagnon was hooked and lost the puck but Francis Wathier followed up on the chance, potting his 16th of the year.

Pugilism picked up in the last few minutes of the second with Dan Spang on the receiving end of a high hit from Ryan Stone. Scott McCulloch dropped the gloves with Stone, taking an instigator minor and misconduct. The Stars outshot the Heat 15-7 in the middle frame.

The third period was a valiant effort for the Stars, who kept the shots down and close. The only scoring in the period was an empty netter for Alex Kotalik with 23 seconds left in the game. Texas is now on a five game losing streak, going 0-2-1-2 in their last five.