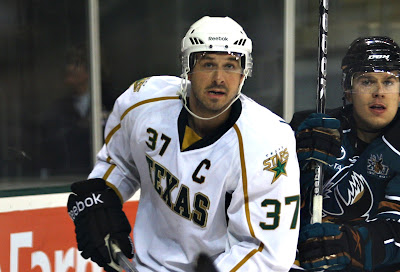 Stars' captain Brad Lukowich (Credit: Ron Byrd)
The Texas Stars announced yesterday that Brad Lukowich is the team's finalist for the AHL Man of the Year award. The press release below details all of the good work he has done in the community. Last year's winner was Landon Wilson, for reference.

Here is the release:

The Texas Stars are proud to announce that Brad Lukowich has been named the team’s winner of the IOA/American Specialty AHL Man of the Year award for his outstanding contributions to the Central Texas community during the 2010-11 season.

On and off of the ice, Texas Stars Captain Brad Lukowich is a leader. Over the course of the 2010-2011 season, Brad has demonstrated an infallible dedication to his team and his community through the Texas Stars Foundation.

Even before the season began, Lukowich was active in the formation of the Texas Stars Foundation, the registered charity of the Texas Stars. Making it a family affair, his wife Cara has also lent a hand as a board member for the organization.

With the season underway, Brad and his teammates participated in Pink in the Rink, raising awareness and funds for Susan G. Komen for the Cure ® while celebrating breast cancer survivors. Even the jerseys off of the players’ backs went to the cause, and under Brad’s lead, the players stuck around after the game for photos with survivors, auction winners, and fans of all ages. All told, over $10,500 was raised for breast cancer treatment, research, and prevention in the Central Texas community.

Almost immediately after Pink in the Rink, Brad switched gears toward men’s health, encouraging his teammates to participate in the international “Movember” fundraiser, where throughout the month of November men grow moustaches to support prostate cancer prevention and treatment. The Stars were one of the leading fundraisers in Central Texas for the Movember Foundation, and Brad’s moustache was one of the most recognizable in the area.

Over the holidays, Lukowich’s charity efforts heightened both personally and with the team. Together, Brad and Cara privately organized an effort to sponsor women and children in a domestic abuse shelter to ensure a bright and cheery Christmas. Brad and Cara led a group (composed of players, staff, wives and girlfriends), who participated in helping the selected families have an unexpectedly happy holiday. The group donated more than 28 gift baskets and provided Christmas gifts for members of three large families. In addition to supporting the shelter, the Lukowich family led a fundraiser to hand-paint Christmas ornaments to raise funds for the foundation.

Throughout the entirety of the season, Brad has mentored the team, encouraging them to visit fans, enhance their on-ice skills, and reach out to their community. This season, Brad has visited children in all sectors of Austin and Cedar Park, from the local hospitals to numerous elementary schools. This year, Brad made a special effort at the hospital to visit patients and families alike, going room by room in the long-term care units, making instant fans out of the patients. At elementary schools, Brad and his teammates read aloud to students, played floor hockey, and even sang with the children.

Throughout the month of January, Brad was instrumental in the preparation for the Foundation’s largest fundraising event, Casino Night, which brought in over $25,000 for the Texas Stars Foundation. His expertise also proved vital in prepping for the team’s charity golf tournament and coordinating community service events.

Over the course of the 2010-2011 season, the Texas Stars donated more than 1,700 tickets to military service members and veterans. Brad and the Texas Stars embraced the military community, honoring them through military salutes, ceremonial puck drops, and through the fundraising of more than $25,000 for the construction of a Veterans Memorial in Cedar Park.

Lukowich is now one of 30 finalists for the AHL’s 2010-11 Yanick Dupre Memorial Award, honoring the overall IOA/American Specialty AHL Man of the Year. The league award is named after the former Hershey Bears forward and AHL All-Star who died in 1997 following a 16-month battle with leukemia. The winner of the Yanick Dupre Memorial Award will be announced by the American Hockey League in the coming weeks.