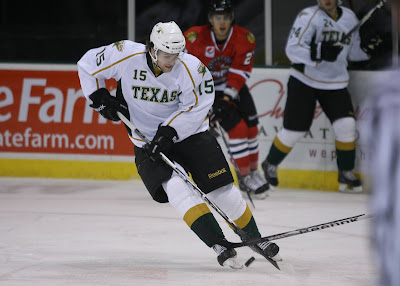 Now that the Clear Day rosters are out, Michael Neal and Guillaume Monast both travel back to Idaho; neither was included on the Stars Clear Day roster. I think we’ll see both of them next year for Texas. Remember that this time last year the Stars also parted ways with Mathieu Tousignant, who went on to play in 13 Steelheads playoff games.

The Texas Stars announced on Tuesday that defenseman Guillaume Monast and forward Michael Neal have been assigned to the Idaho Steelheads, Texas’ ECHL affiliate.

Monast has one assist in nine games for Texas over three separate recalls from Idaho. He registered his first AHL point with the Stars this season at Lake Erie on Feb. 16. In 41 games for Idaho this year, Monast has one goal and seven assists while adding 22 penalty minutes. The Quebec native spent his rookie season with Idaho, setting up six goals in 68 games played, helping the Steelheads reach the 2010 Kelly Cup Finals. Monast attended training camp in Dallas and in Texas each of the last two years.

Neal is in his second pro season after spending the bulk of his rookie season with Idaho. Neal has played in 15 games for Texas this year, scoring three goals and totaling 12 penalty minutes. This season, the Whitby, ON native has played in 36 games for the Steelheads, scoring six goals and totaling 13 points. Last season, Neal played in 57 games for the Steelheads, posting 15 points on five goals and ten assists. The 21-year old also skated in six games for the Texas Stars without registering a point. Neal was drafted in the fifth round (#149 overall) in the 2007 NHL Entry Draft and he is the younger brother of Pittsburgh Penguins forward James Neal.