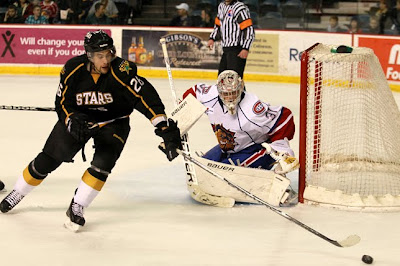 Cody Chupp skates to gather a puck as Drew MacIntyre looks on in this afternoon's game in Hamilton. (Credit: Pellerin Photography)

The Stars had a shot at earning at least one point in this afternoon's game with five minutes left in the third period. Richard Bachman earned the third star in the game, making 30 saves on 33 shots against. While Texas lost, luckily so did every other team in the West Division in action today. No wins mean no movement in the standings.

Hamilton had staked itself to an early lead, but only for a short while. Ian Schultz's first of the year was followed very quickly by Travis Morin's 14th, and first since returning from injury. The game continued, tied at one, until five minutes left in the third period.

Andrew Conboy broke open the scoring in the third period with 4:54 left, jumping on a loose puck and putting it past Bachman to set it at 2-1. Hunter Bishop scored off the rebound with under two minutes left to ultimately put the game out of hand. Travis Morin scored a power play goal with just five seconds left, but the game was all but over at that point.