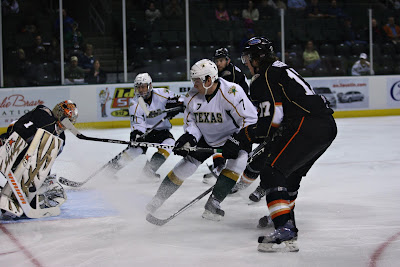 Colton Sceviour and Greg Rallo push in on Crunch goalie Ray Emery in today's game. (Credit: Texas Stars)
In their first home day game, Texas fell flat and didn't execute right out of the gate. A sluggish first period against the Crunch doomed the Stars prospects at two points on the day. "We weren't prepared," said Coach Gulutzan postgame. "I guess I have to take that on the coaching side."

"We weren't ready and there's no excuse for it," added Stars center Travis Morin.

On the first shift, Dan Spang had no breakout options and rimmed the puck around the boards from behind his own net. John Mitchell caught the 'pass' and scored his 7th of the year unassisted just 19 seconds in.

The Crunch's second came three and a half minutes later on a penalty shot. Brad Lukowich was called for hooking, and Matt Kennedy took the shot, scoring five hole on Beskorowany. "We really lost the game in the first five minutes," said Gulutzan.

In the second period, Syracuse' third goal came on the rebound with Brian McGrattan cramming a puck past Beskorowany on the left side. Richard Bachman replaced Beskorowany, who stopped three of six shots against. Brad Lukowich got Texas on the board on the power play just past the game's halfway point. His shot from the point made its way through all the traffic in front and into the net for his 4th of the year.

Through the third period, Texas continually got beat on foot races to the puck and couldn't put together a consistent offensive effort, despite seven power play opportunities in the game. "If we bury those [power play] chances, it's a different game," said Morin. Texas had 28 shots in the game to Syracuse's 19.

The Stars will travel to Syracuse to face the Crunch again on Friday. Ray Emery will not be in net for Syracuse in the return game, however.