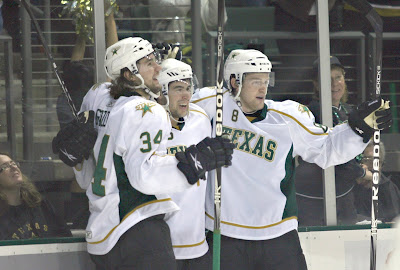 Before most fans had found their seats, Texas was already on the board. Mathieu Tousignant shot a puck from the left wing circle that was tipped in front by Brandon Segal to make it 1-0 just 17 seconds in. Ray Sawada scored in a similar fashion just 150 seconds later on a tip from a Maxime Fortunus shot. A carbon copy of that play made it 3-0 and chased Matt Climie from the net after allowing three goals on nine shots. Maxime Fortunus assisted on the first three goals for Texas.

The Stars got one more in the period off an odd man rush. Joe Fallon had his corner picked by Cody Chupp, his 5th of the year. "We couldn't have gotten any more bounces to go our way in the first," said Gagnon. Texas ended the period ahead 17-13 on shots.

The second period was filled with pugilism as San Antonio found the game out of reach and decided to use their fists and elbows instead of their sticks. Forty-three penalty minutes were doled out in the period but no power play goals resulted for either team.

It was the power play though that got San Antonio back in the game in the 3rd. Texas' Brandon Segal took an ill-advised charging major penalty, giving the Rampage five minutes of power play time. They used all of it.

"We got in a bit of penalty trouble [in the third]," said Gagnon. "And all the sudden we're on our heels."

San Antonio scored power play goals from Tikhonov, Picard and Beaudoin to get it to 4-3. Bracken Kearns got it to even with half a period left, and Texas was tied up without any of the momentum. San Antonio scored their fifth unanswered goal with 3:34 left in the third period to go ahead 5-4.

With Richard Bachman on the bench and the 6th man on for Texas, it was Aaron Gagnon who sniped the corner from the low left wing side to make it 5-5 and take the game into overtime.

In the end, it was Greg Rallo taking the stick to the face and then scoring the game winner in OT. With a 4 minute power play on the board for high sticking, Greg Rallo went to work from "his office", the left wing circle. The slapper was his 7th game winning goal of the season and 20th goal overall.

Francis Wathier came off the ice favoring a leg in the second period and did not return to the bench in the third.