Admirals Overwhelm Stars In Game One 5-2 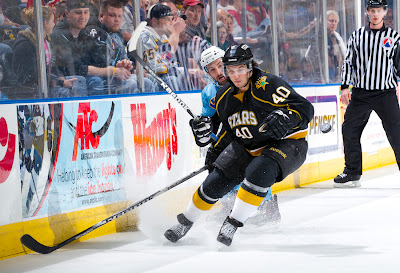 Mathieu Tousignant in tonight's game in Milwaukee (Credit: Jeff Hanisch/Milwaukee Admirals)
The Milwaukee Admirals had all the puck luck in tonight's game as Chris Mueller and Gabriel Bourque combined for 9 points. Richard Bachman, the Stars' rookie phenom goalie, was pulled after two periods, allowing four goals on 17 shots. Tyler Beskorowany spelled Bachman and allowed two of his own on seven shots.

Texas seemed guilty of a lot of standing around. After backing into the postseason scoring no goals in 120 minutes of hockey, the Stars played an unenthused brand of hockey against an energized and ready Ads squad. The Stars will re-rack for Saturday, taking a hard look at the game footage from tonight to determine what they need to improve.

The Stars opened the scoring in the game halfway through the first period. Aaron Gagnon scored his first of the postseason on the power play with Ray Sawada screening out Jeremy Smith in front. Dan Spang and Travis Morin got the assists.

The Admirals roared back over the next 30 minutes, scoring 4 unanswered goals. Gabriel Bourque tallied two of those goals and had assists on the other two. Two of those goals came before the end of the first period, setting Texas at a 2-1 disadvantage after 20 minutes.

The Ads continued to beat on the Stars in the 2nd. Texas squandered a 65-second 5-on-3 power play in the period and allowed two goals, both assisted by Chris Mueller, who had a goal in the first as well.

Richard Bachman would not finish the game as Tyler Beskorowany took the reins for the last period. Mathieu Tousignant would add another in the period on a nice shot from the left wing side using Ray Sawada as a screen. However, it was just the Admirals night as Travis Morin was stripped of the puck heading out of the Stars zone and Chris Mueller collected his second of the night.

Jordie Benn did not return to the game after a hard hit in the second period.