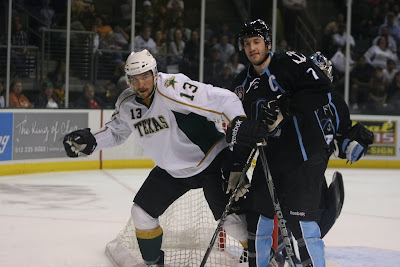 Ray Sawada had the Stars' only goal in the game on the power play in the first. (Credit: Ron Byrd/Texas Stars)
Texas's final home game of their opening playoff series was exactly what you would have expected from these two teams coming in: sixty hard minutes of grind-it-out hockey with sparkling goaltending and only a one goal difference between the two clubs. The match almost went completely to script but ran off the rails at the end of 60 minutes for Texas. The Stars now find themselves in a 3-2 series hole heading back to Milwaukee on Monday.

The Stars staked themselves to a one goal lead early in the game. Ray Sawada tapped home a redirect from Philip Larsen on the power play just 10:20 into the first period. It was the sort of start that the team has talked about having. The first period ended with a 1-0 lead for the Stars. So did the second.

It was the combination of fantastic goaltending from Bachman and Smith and the Texas penalty kill. Brenden Dillon commented on the penalty kill: "We were working well with sticks in the lanes and doing our best to get those clears down the ice."

The Stars held on for 59:55, staking Richard Bachman to what would have been his first AHL playoff shutout. The Admirals pulled Jeremy Smith with 1:34 left in the third period. With six on the ice, the Admirals crashed the net and got one past the rookie Bachman. The puck popped up over his right shoulder and into the net with 4.4 seconds left on the clock.

The game went to overtime and the Stars struggled at times to leave their own zone. "[Milwaukee] had more puck possession and time in our zone," said defenseman Matt Stephenson. "When you spend too much time in your zone, bad things happen."

In the end, it was Ryan Thang with the game winning goal in the first overtime. Sixteen and a half minutes into the period, Ryan Thang broke into the zone and snapped a slapshot past Bachman to take the 3-2 series lead. Game six will be in Milwaukee on Monday night.