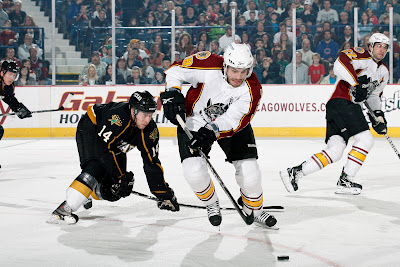 Dave Bonk, who scored the series-winning goal for the Americans this weekend, gets a stick in a lane against the Chicago Wolves.(Credit: Ross Dettmann)

While the Stars wait for tomorrow night's game six against Milwaukee, we take a look around the Stars' farm system as the playoffs are in full swing in every league around.

The Allen Americans faced a tough road. After beating the Rio Grande Valley Killer Bees in three games, the Americans moved on to face the Odessa Jackalopes. The Americans and Jacks took their series last year to seven games. This year's series ws a best-of-5 and the teams would need all five to decide it. The top seeded Americans dropped their first two games at home and went to Odessa on the verge of elimination.

The Jacks then proceeded to drop their two home games, setting up a deciding Game 5 on Friday at the Allen Event Center. The Americans won the game 3-1 on an 18 save effort from Chris Whitley and a two point night from Dave Bonk. Bonk scored the game-winning goal in the second period and added an assist on the game-sealing empty net goal. The Americans will face the Bossier-Shreveport Mudbugs in the Conference Finals starting on Friday at 7:30 in Allen.

The playoffs were not as kind to the Idaho Steelheads. In all reality, the Steelheads should have had a wonderful shot at a Kelly Cup this year, but had inconsistency throughout. Part of the issue was goaltending. Tyler Beskorowany spent most of the year with Texas when he should have been with Idaho. In his short time in Idaho, he was named ECHL goaltender of the month, if that gives any indication of his role as a difference maker.

The Steelheads were bounced from the playoffs by the Alaska Aces 4-0. The Steelheads did make it to the second round however by defeating Coach Gulutzan's former club, the Las Vegas Wranglers, 3-2 in the opening round. In the playoffs, Tristan King had 2-1-3 in 6 games played, Kael Mouillierat had 3 assists in 8 games and Tyler Ludwig had a goal in nine games played.
playoffs