April 19th at 7:30 PM
Cedar Park Center, Cedar Park, TX
The Stars return to Cedar Park Center for central Texas's first taste of playoff hockey since last year's defeat in the Calder Cup Finals. After dropping game one in Milwaukee by a mark of 5-2, the Stars surged back to even the series with a decisive 3-1 victory on Saturday night. Texas played their game with excellent goaltending from Bachman, opportunistic offense, and lockdown defense.

The difference in Texas's play was the physicality and the Stars' willingness to go to the tough areas of the ice. Milwaukee coach Lane Lambert pointed to the Stars getting a man in front of the net occupying goalie Jeremy Smith as a key to their power play success on Saturday, "That’s the way they work their power play, and you can’t really get tied up with them because if you do, you open up other things." Milwaukee felt they were undisciplined in the game, giving Texas six straight power play opportunities. They scored on two of them. 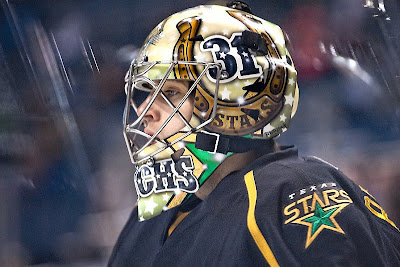 The Stars will look to Richard Bachman for more game-saving stops in Game 3. (Credit: Chris Jerina)

Coach Gulutzan doesn't put much stock in home ice advantage after winning a series after being down 2-0 last year and losing one being up 2-0 as well. "Teams can win away and at home; every games a battle in the playoffs," said Gulutzan. "I'm glad that we're not coming down here 2-0 because then it's certainly an uphill battle."

Texas knows however that coming home with the split was definitely the ideal situation for their chances in the series. Getting the win in Game 2 coming home also gives them a bit of momentum coming into Cedar Park Center. "It's nice having a win under your belt," said goalie Richard Bachman, who stopped 29 of 30 on Saturday. "With a couple days off between games, you're not thinking about a loss. It puts you in a good mindset going into the next game."

Milwaukee is a tough road team, winning twice as many as they lost away from home this season. However, they went 1-1-0-1 in Cedar Park this season. Coach Lane Lambert added, "We’re comfortable playing on the road, and we play well in Texas, so we’ve got that to look forward to."

The Stars however are without a home playoff win in their last four tries. Texas fell in game five to Hamilton and then dropped games three, four and five against Hershey. The last win for Texas was May 21st in OT off a Jamie Benn rebound goal from a Mathieu Beaudoin shot. "[The losses last year] weren't what we were looking for coming back here," said Bachman. "It's a different year with new guys, so it'll be nice to play a home game."

So the Stars look to the fans to keep the building hostile for the visitors and friendly for the Stars. "I think if we can get going here, we'll get some real good crowds," said Coach Gulutzan. "The support has been tremendous. Hopefully we can continue on and create some excitement."