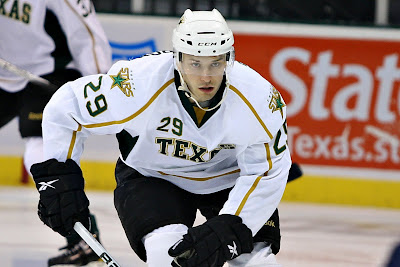 If nothing else, these historical jersey numbers teach us that you should not choose to wear #29 for Texas unless you want to be traded midseason by Dallas. Fabian Brunnstrom and Ivan Vishnevskiy both wore the number for Texas. (Credit: Ron Byrd)

The Dallas Stars have a feature similar to this in their media guide so I thought I'd roll one out for the Texas Stars. Here is the list of all of the jersey numbers worn by the Texas Stars and who wore them. The page link is going in the sidebar and will continue to be updated as the years go by.

As a side note, I did not include players who may have signed or been assigned but never dressed for a game (Judd Blackwater, Alex Auld, and Brad Miller). I also only included regular and post-season jersey numbers since the AHL does not keep publicly accessible preseason statistics.

Here are a few interesting bits of jersey number trivia:

As a frequent reader pointed out, "When you get that big callup to ride the pine as the backup goalie, ask for #39, and you'll be in the record books!"