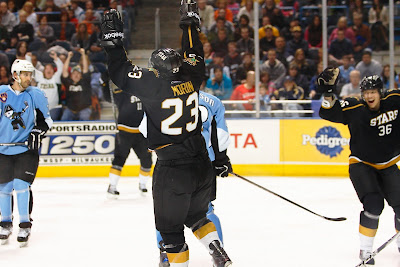 Travis Morin celebrates his 3rd period insurance goal. Two Texas fans, identified by the photographer as Hundred Degree Hockey readers, celebrate along with Morin. Please let me know if you are them! (Credit: Chris Jerina)

Coach Gulutzan on the difference between tonight and Game 1:
"We needed to be more physical on their D. They have a veteran D back there. They're not going to cough up plays unless you force them into it. It may not happen in the first period, but if you keep playing physical, hopefully we can create chances in the third. Collectively, our team was more physical."

Coach Gulutzan on going back with a 1-1 series tie:
"To be honest with you, I put absolutely no stock in being down, up, or whatever. Each game's its own. If you want to go back a year, we were up 2-0 going home for three [against Hershey], it doesn't help you. Won a series where we were down 2-0 [Ed. note: Hamilton], lost a series where we were up 2-0. Every team we've got to play, especially when the teams are so equally matched."

Richard Bachman on bouncing back from Game 1:
"In game 1, some bounces didn't go my way and some goals went in that I didn't like. You have to move on and forget about it in playoff hockey and that's what I tried to do. It was nice to come out tonight and have the performance that we had and get the support from the team in front of me."

Aaron Gagnon on the intensity rise from Game 1 to 2:
"I think we were a little guilty of trying to feel them out a little bit in Game 1. Tonight we emphasized that before the game, being more physical, and I think we were."

Milwaukee Coach Lane Lambert on penalties and special teams:
"I think the frustrating part was we took some bad penalties too. We talk about discipline and staying out of the box against that hockey team, and they’ve got a good power play. Eventually it’s going to catch up to you. At the end of the day [special teams are] the difference in the game. Their power play scored and ours didn’t; their penalty kill held and ours didn’t. Special teams are going to be a huge factor in these games, and we’ve got to find a way to win that special teams battle."
postgame audio