Season Recap: Who Was The Stars' MVP?

Posted by Stephen Meserve on April 28, 2011
In recapping the season after a tough season-ending loss to the Admirals on Monday, I wanted to start light and begin with something that lets us look back at the best parts of the season. Today we seek to answer the question: Who was the Texas Stars' MVP this season? I'll present the case for a few different folks and let you guys fight it out in the comments, on the Twitters and on Facebook. 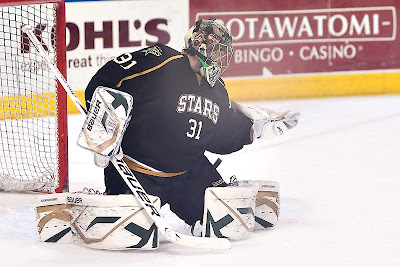 I think from a Stars fans' perspective, this is the most obvious candidate for the season MVP. Richard Bachman wasn't even supposed to be the guy this season. In re-listening to the media day interviews from October, I am reminded that Brent Krahn and Bachman were supposed to work together as a 1 and 1A combo in nets for Texas this season. Then, Brent Krahn was struck down by injury in the early season and the entirety of the goaltender burden was shifted to Richard Bachman.

And the young rookie responded beautifully. In 55 games of action, Bachman had a 28-19-5 record with a 2.20 GAA and .927 SV%. His stats were good for the 4th best goaltender in the AHL and top ranked rookie goalie as well. He faced the second most shots in the league (1,478) and had the 3rd highest save percentage (.927) anyways. His workhorse demeanor also showed through his minutes, second most in the league with 3,191.

Goaltending coach for the Dallas Stars Mike Valley has paid close attention to Bachman's work in Cedar Park, especially after he took over the starting role. "He got a lot better of an opportunity here than we expected. [He was] thrust into a situation we didn't expect him to be in but [he has] handled it great." Coach Gulutzan has also been consistently glowing in his praise of the young netminder, calling him a "quiet competitor". Gulutzan cited many of the stats that are mentioned above to show his confidence of moving into the playoffs with a "rookie" goaltender. From what we saw in Cedar Park this season, Bachman was certainly not playing like a rookie and was one of the Stars' most valuable players this season. 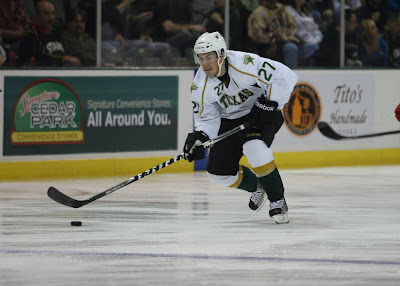 It's a little bit of a cop out, perhaps, to select the leading point and goal scorer as one of your MVP candidates, but with Greg Rallo, there is a certain something more to his game than a scoring touch.

Rallo definitely found a scoring touch this season, scoring career record numbers of goals (26), assists (28), and points (54). He had a knack for clutch scoring as well with seven game-winning goals, including some very memorable game-winners against San Antonio in overtime period at the CPC. Greg played in every situation for Coach Gulutzan, the ultimate sign of trust from a Coach. Whether PP, PK or even-strength though, Rallo was a competitor: strong on the forecheck, strong on the backcheck, sticks in lanes and blocked shots on the PK.

And of course, if you'd like to send a congratulatory letter to Greg on his selection here as a candidate for Stars MVP, just send it to his office address in the left wing circle. On the power play, Rallo had a Stamkosian ability to get open and bang home one-timers from the left wing circle. And finally, the workhorse 29-year old only missed two games out of 80 this season. The only reason he missed them was that Texas had already made the playoffs, and his coach and team needed him to rest up for the first round. MVP, indeed. 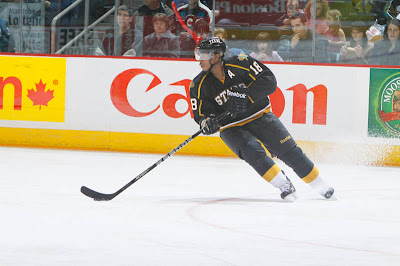 Ever so quietly, Maxime Fortunus had a career year. You might not know it though because Cedar Park Center fans have become so accustomed to seeing from the 27-year old defenseman excel on both sides of the puck. Fortunus did not have as many goals as last year (5 as opposed to 11) but set career highs in assists (29) and total points (34). While offensive numbers are nice and Max's are great this year, what really sets him apart for the MVP award in my mind is his mentorship.

Looking back at the defensive pairings for the year, Coach Gulutzan consistently paired Max with some of the younger players on the squad. It was pretty much a guarantee that whenever Jordie Benn was in the lineup, he was going to be paired with Fortunus.

After Benn got enough seasoning to stand on his own, Fortunus got paired with newcomer Brenden Dillon through the last games of the season and the playoffs. Dillon garnered high praise from Dallas media as the ATO signee played like he'd been in Austin all year long. Fortunus is a key piece for the Stars moving forward and with all of the new players on this year's club, his veteran leadership was a valuable piece of the Stars puzzle this season.

So what do you think? Agree or disagree? Did I miss someone? Let me know in the comments, @100degreehockey on Twitter or on the Facebook page.
analysis