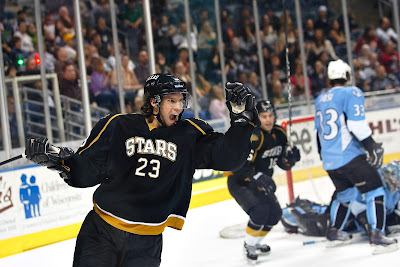 The Texas Stars clinched their second consecutive berth in the Calder Cup playoffs by controlling their own destiny and winning in regulation against the Milwaukee Admirals at the Bradley Center this evening*. Two goals from Travis Morin, including the game winner, and 31 saves on 33 shots for Richard Bachman set the score at 3-2. While seeding has yet to be determined, what Texas does know is that they are going back to the postseason no matter the outcome of their last two games.

Texas opened the scoring early and never trailed in the game. Ray Sawada got his 11th of the year on a tip from a Jordie Benn point shot to make it 1-0. The deflection made it past goalie Jeremy Smith just 3:05 into the game. The Stars would not look back.

Travis Morin scored the first of his two goals in the game on the power play in the second period. The tally, assisted by Ray Sawada and Aaron Gagnon, was his 20th of the season. The score drew closer in the third as Grant Lewis scored on a shot from the high slot, unassisted. The Stars buckled down for the remainder of the third depite being outshot 11-5 in the frame.

Travis Morin collected his second of the night on a rebound from a Greg Rallo shot with 3:19 left in the third. Shortly thereafter, Morin took a tripping penalty and Lane Lambert pulled Jeremy Smith for the 6-on-4 power play. Mike Bartlett made it count with just 27.2 seconds left in the period. The power play ended, setting the advantage at 6-on-5. Texas prevailed and earned their second straight playoff berth.

* - In my gameday preview, I indicated that Texas would need losses from other teams to get into the playoffs tonight. This was based on incorrect information from TheAHL.com that was later corrected to indicate that the Stars could clinch with a regulation or OT victory. Hundred Degree Hockey apologizes for the mistake.
postgame